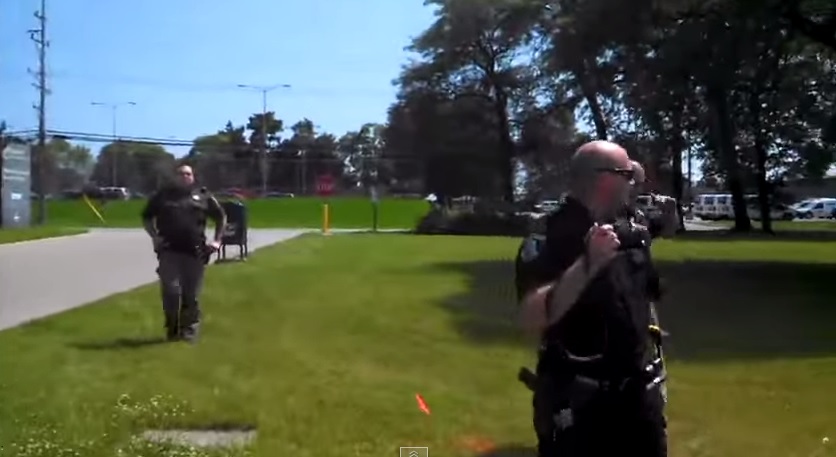 In the latest video uploaded to YouTube by LibertyisForEveryone, Macomb County Sheriff’s deputies wasted at least 10 man hours of time stalking and harassing a couple of photographers that were simply filming the Sheriff’s Department building.  In the video the deputies never say that the photographers are detained, but follow them around and demand ID.

The photographers never give ID and keep walking away from them.  There were four different cruisers following them around as they walked along with several other deputies on foot.  At no time from what you can see in the video did these gentlemen break any laws.

At one point, the photographers make it back to their vehicle only to be followed by two patrol cars and pulled over for supposedly making an illegal left turn.  The officer tells the driver that there is a sign that says that there is no left turn permitted where he had turned.  The driver asked if there was a After taking the driver’s information and running him through the system, the officer tells the driver he is going to give him a break on the turn.  After the stop is concluded, the driver goes back to see if there is a sign and discovers that there is not one.  That is why the officer didn’t write him a ticket, because the driver broke no laws and he just wanted to ID the photographers that were doing nothing more than filming the outside of a building from public property.

Police seem to be getting more brazen in their attempts to violate the rights of citizens that have committed no crime.  The only way to make change is to call these officers out on their illegal behavior each time we see it.  Feel free to contact the Macomb County Sheriff’s Department at the number at he top of the story and ask these officers why they continue to ignore their oaths and violate the rights of citizens.  Ask them if wasting 10 man hours to stalk and harass a couple of photographers was in the best interest of the public and the tax money wasted on those resources when there were surely real crimes taking place somewhere in the county that they could have been attending to.