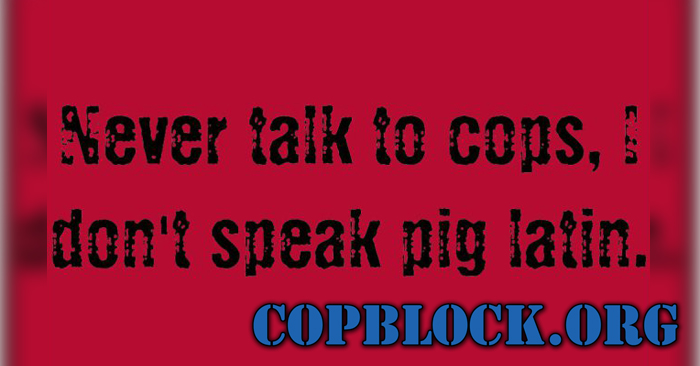 Earlier this week I blogged about Kyle Hammond, who was arrested by Officer Hughson after he chose to remain silent during their interaction. From my original post, titled ‘Man Puts “Do NOT Talk to the Police” Advice to the Test’:

Kyle Hammond was conducting a First Amendment audit of an FBI building in Henrico County, VA when Officer Hughson approached with a line of questions. Choosing to exercise his right to remain silent, Kyle decided to not say a single word. Now, many people have said you shouldn’t talk to police.  I know I’m one, but not many have actually put that to the test. Does it work? Do the police allow you remain silent and walk away? I know I’m too much of a loud mouth to actually keep it shut when CopBlocking – and sure, that’s led to an arrest or two in my day – but I’m glad Kyle decided to take up this police officer experiment.

From the video above one may come to the conclusion that “not talking to the police” could lead to more trouble than it’s worth and, for the most part, that’s probably true. Depending on who you are. It seems Kyle is no stranger to police interactions or recording government buildings; after all, he was conducting a First Amendment audit of an FBI building. Nevertheless, it seems that since this story was picked up by a number of additional sites, including TruthVoice.com, FilmingCops.com, PhotographyIsNOTaCrime.com, and CounterCurrentNews.com, the public pressure has made “it’s more trouble than it’s worth” the song of the prosecutors now.

Kyle emailed me just a few hours ago, stating:

Thanks for all your help Ademo. The DA just called my lawyer and is dropping the charges. We are unclear if the charges are going to be null processed or dismissed with prejudice yet. We will have to make one more court appearance next week to get them formally dismissed.

An immediate smile came over my face after reading the email and it feels great to have played a role in helping a favorable and logical conclusion come to Kyle’s case. A big thanks to anyone else who commented, called, or inquired on Kyle’s behalf. Now if we can just get the same results on some of these Killer Cops out there and not just those who trash pool parties or First Amendment rights.