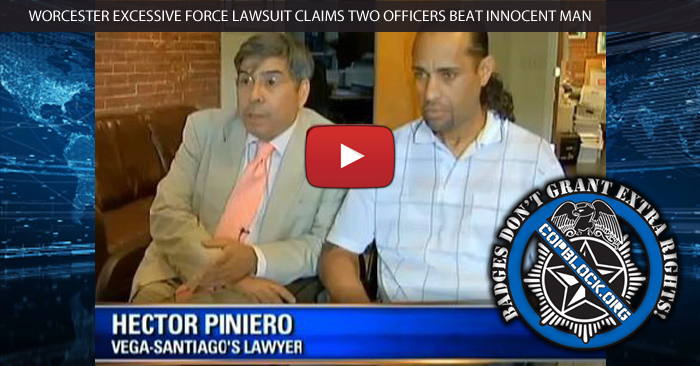 A lawsuit filed by Edwin Vega-Santiago claims two Worcester, MS police officers attacked him without warning and without any real justification. In the suit, Vega-Santiago states he was standing on a street corner with a friend and his girlfriend when a police car pulled up next to him and, without even saying anything, Detectives Michael Ryder and James Guittar began assaulting him.

After being slammed against the patrol car and punched several times, including twice in the groin, Vega-Santiago was knocked to the ground and his head hit the pavement. Vega-Santiago, who is an epileptic, then had a seizure. Det. Ryder can be scene in a video recorded by a witness jabbing him in the face with a baton as he has the seizure, even though they claimed in their police report that they never took their batons out during the incident.

Even though he was not arrested or charged with any crime, police also claim in their report that Vega-Santiago and the others in his group were trespassing at the time. In addition, they state that he didn’t actually have a seizure, but was just faking it because “he didn’t want to go to jail” and had “spontaneously gone to the ground and started having seizures.” However after noticing his medical alert band, which identifies him as an epileptic, they took him to the hospital.

According to Vega-Santiago’s girlfriend, when Ryder was jabbing him with his baton he called him “a scumbag piece of shit junkie.” After which, Det. Guittar told her to leave or she would go to jail and called her a “Puerto Rican [expletive].”

The lawsuit also states that the Worcester Police Department has a long history of police brutality and not holding police accountable for that brutality:

The complaint, filed by Vega’s attorney Hector Piniero, alleges that the city and police department have a history of not investigating when officers use force against citizens.

“The defendants City of Worcester and Gemme routinely failed to substantively investigate cases of persons getting hurt by the police, even if victims complained,” the complaint reads.

The complaint also notes that there are currently 14 open civil rights cases against the Worcester Police Department and specifically references the recent charges brought against Officer Michael Motyka for allegedly beating a shackled prisoner and making alleged racist comments.