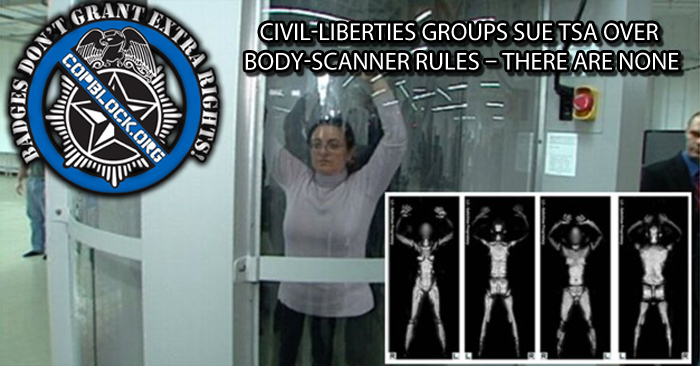 Everyone’s favorite government agency is being sued by an alliance of three civil-liberties groups in a lawsuit filed in the U.S. Court of Appeals in D.C., Wednesday.

The Competitive Enterprise Institute, the National Center for Transgender Equality, and the Rutherford Institute say the rules governing how the TSA can utilize its controversial body scanning technology are nonexistent.

“There is no regulation controlling the use of body scanners right now,” the Competitive Enterprise Institute‘s Marc Scribner said. “TSA has been using scanners the last seven years but that entire span of time they’ve been operating without a[ny] regulation.”

The groups say the TSA has run roughshod over federal law and court orders in order to shield its scanning practices from the public, and are asking the court to force the agency to propose a system of regulations within three months.

“We are the unwitting victims of a system so corrupt that those who stand up for the rule of law and aspire to transparency in government are in the minority,” John Whitehead of the Rutherford Institute said. “This corruption is so vast it spans all branches of government, from the power-hungry agencies under the executive branch and the corporate puppets within the legislative branch…”

“Body imaging scanners are a perfect example of this collusion between corporate lobbyists and government officials,” Whitehead says. “At a minimum, the TSA should be required to establish rules governing the use and deployment of these scanners and have those regulations vetted by the public.”

The lawsuit would require all TSA proposals to be subject to public comment and expert evaluation before implementation.

The suit comes only a month after the agency was disgraced again by its almost-total failure in a covert security audit.

In response, Homeland Security Secretary Jeh Johnson has ordered the agency to pursue an improvement plan that will require a greater security crackdown meaning longer wait times for travelers. The measures will include more hand-wanding, more use of bomb-sniffing dogs and more random testing of luggage and travelers for traces of explosives.

The lawsuit is the latest filing in a lengthy court battle since the TSA first began deploying the machines in 2007. The agency has installed 740 body-scanners across 160 airports nationwide.

In 2011, the same federal appeals court ruled in an earlier case involving the Electronic Privacy Information Center that the TSA needed to develop rules for body-scanners under the Administrative Procedure Act, but though the agency proposed ideas in 2013, it has not followed through.

The civil-liberties groups are asking that this prior ruling be enforced.

“For four years the TSA has flouted the court’s order, preventing the public and outside experts from scrutinizing their actions as required under the law,” Scribner said. “This lawsuit aims to enforce that court decision and bring much needed accountability to an agency plagued by lawlessness.”