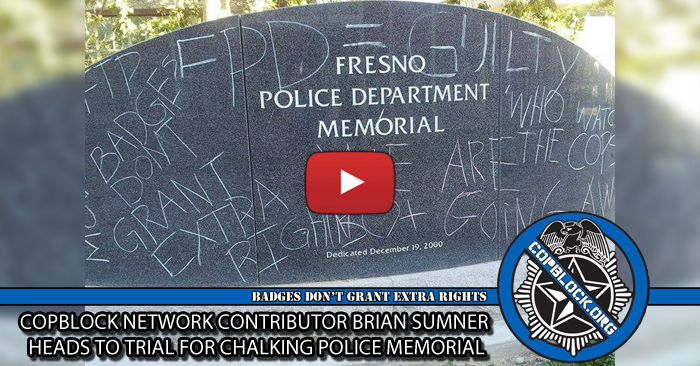 UPDATE: Today, July 27th, 2015, Brian was found guilty of misdemeanor vandalism and will be sentenced this upcoming Thursday. He faces up to a year in a cage and a $1,000 fine.

Brian Sumner is a CopBlock Network Contributor, as well as an active participant of Fresno CopBlock and the People’s Media, who’s about to go on trial for misdemeanor vandalism in Fresno County Superior Court today (9 am West Coast time). This charge stems from an incident last June, five days after Fresno police shot Miguel Moreno Torres, when Sumner decided to send a message to the Fresno Police Department that such actions are not acceptable. No, he didn’t’ write them a letter, nor did he send an email, instead he took children’s chalk and wrote messages on the Fresno Police Memorial (see picture above). The charge of misdemeanor vandalism can land Brian, at the expense of Fresno taxpayers, in jail for one year and with a $1,000 fine.

Yet, like many of us that are about to participate in the Third Annual Chalk the Police State Day already know, chalking public property isn’t vandalism because chalk does NOT damage property. As much as police like to claim that it does, or could (see the Dodge County Sheriff’s in this video claim it might create damage after it washes off, LOL), the simple truth is that it doesn’t. Kids eat this crap all the time and if it doesn’t hurt a person I doubt it’s going to phase concrete.

Still, here I am blogging about another person who’s been charged with a crime, headed to trial and possibly to jail and for what? Butthurt, that’s what. The Fresno police are just sensitive. They got their feelings hurt when Brian took his message to their police memorial. Sadly, the police needed the taxpayers of Fresno to pay for their little memorial, which means, it’s public property and you’re supposed to be able to have freedom of speech on public property. I guess someone forgot to tell the Fresno police this, or they simply didn’t care.

Fresno Police aren’t the first police department to get butt hurt over chalk on their buildings. In 2010 myself and many others chalked the Manchester Police Department and it was going very well. Nearly the entire sidewalk and building were covered in chalk, it wasn’t until the Fallen Police Memorial was chalked that police started to arrest anyone they could get their hands on. This lead to the arrest of eight people and similar charges that Brian faces tomorrow. I was found guilty and served 60 days in jail for my chalking offense, but there was more to my story than just the chalking. I was also being targeted by the City for another case at the time I was sent to jail – you can read more about that here.

The point is that the courts have ruled that chalking is protected speech but not for CopBlockers, who are regularly fined and/or jailed. As mentioned before, I’ve been to jail for chalking so has Kelly Patterson, NVCopBlock.org Founder, several of us in New Hampshire and more. Yet, below are three stories where the police or taxpayers were punished for their wrongful chalking arrest.

Let’s try to give Brian some support today and end the chain of CopBlockers who go to jail for freedom of speech. He’s declined any plea deals and is headed for a trial today. If you’re in the Fresno area, consider joining him at the Fresno County Superior Courthouse (1100 Van Ness Ave) at 9 am. You can also make a call to Lisa Smittcamp, the prosecutor wasting your tax dollars in this case, at (559) 600-3141. Remind her of the 1st amendment, that chalk doesn’t damage property or that if cops would stop caging, extorting and killing people then maybe  folks wouldn’t send them messages on their lame ass memorials (they can’t even pay for themselves).

If you’d like to stretch your chalking legs check out some of the upcoming events across the country this Saturday, July 18th, by clicking here. Below are a few videos of CopBlockers chalking the police.