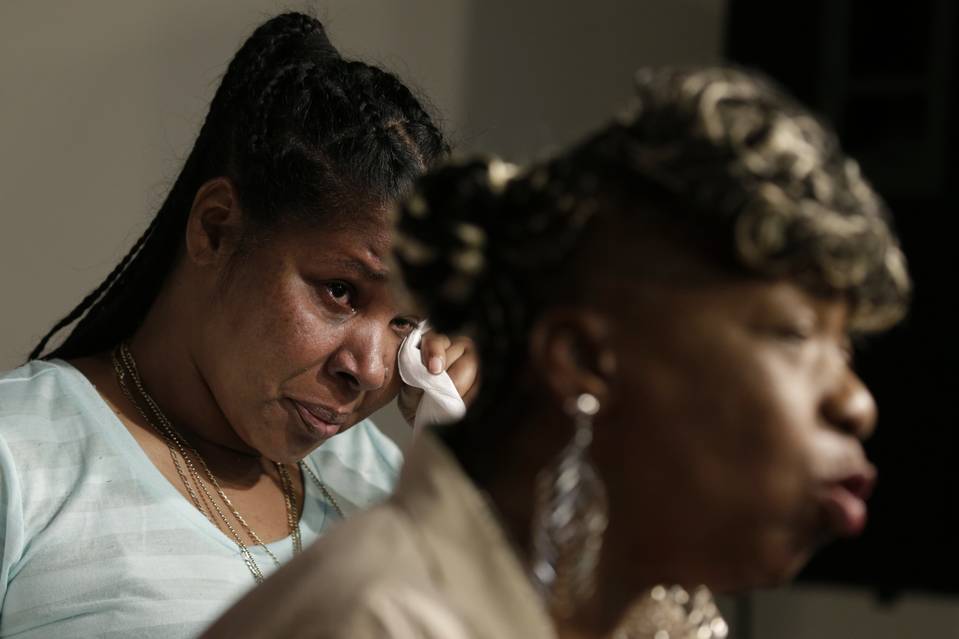 The cost of resolving police-misconduct cases has surged for big U.S. cities in recent years, even before the current wave of scrutiny faced by law-enforcement over tactics.

The 10 cities with the largest police departments paid out $248.7 million last year in settlements and court judgments in police-misconduct cases, up 48% from $168.3 million in 2010, according to data gathered by The Wall Street Journal through public-records requests.

Those cities collectively paid out $1.02 billion over those five years in such cases, which include alleged beatings, shootings and wrongful imprisonment. When claims related to car collisions, property damage and other police incidents are included, the total rose to more than $1.4 billion.

On Monday, New York City agreed to a $5.9 million settlement with the estate of Eric Garner, whose death after being put in a police chokehold last summer sparked widespread protests.

City officials and others say the large payouts stem not just from new cases, but from efforts to resolve decades-old police scandals. In 2013 and 2014, for example, Chicago paid more than $60 million in cases where people were wrongfully imprisoned decades ago because of alleged police misconduct.

For some cities, the data show that cases have gotten more expensive to resolve. Philadelphia police have faced criticism for numerous shootings in recent years. Last year, the city settled 10 shooting cases for an average of $536,500 each. In 2010, it settled eight for an average of $156,937. A city lawyer attributes the rise to a few large settlements, not a pattern of questionable shootings.

“The numbers are staggering, and they have huge consequences for taxpayers,” says Kami Chavis Simmons, a former assistant U.S. attorney who now directs the criminal-justice program at Wake Forest University School of Law. “Municipalities should take a hard look at the culture of police organizations and any structural reforms that might help alleviate the possibility of some of these huge civil suits.”

William Johnson, executive director of the National Association of Police Organizations, which represents about 240,000 officers, says lawsuits and settlements aren’t necessarily an indication of problematic policing. “You could have Mother Teresa running a police department and you’re still going to have lawyers out there saying she’s not to be trusted and we’re going to sue,” he says.

For most of the police departments surveyed by the Journal, the costliest claims were allegations of civil-rights violations and other misconduct, followed by payouts on car collisions involving the police. Misconduct cases were the costliest for New York, Chicago, Los Angeles, Philadelphia, Washington, Dallas and Baltimore. Car-crash cases were the most expensive for Houston, Phoenix and Miami-Dade, a county police department.

The data don’t indicate whether cities are settling such claims more quickly, but some recent cases suggest that might be happening, especially in cases involving video.

In April, less than two weeks after a news helicopter captured video of sheriff’s deputies in San Bernardino County, Calif., kicking and beating Francis Pusok , the county reached a $650,000 settlement with him. Mr. Pusok had been trying to escape from the deputies on a horse he allegedly stole. He hadn’t filed a lawsuit at the time of the settlement and still faces charges.

“They wanted this to go away fast,” says Sharon Brunner, a lawyer for Mr. Pusok, who is fighting the charges. A spokesman for the county said the quick payout was made to avoid costly litigation. 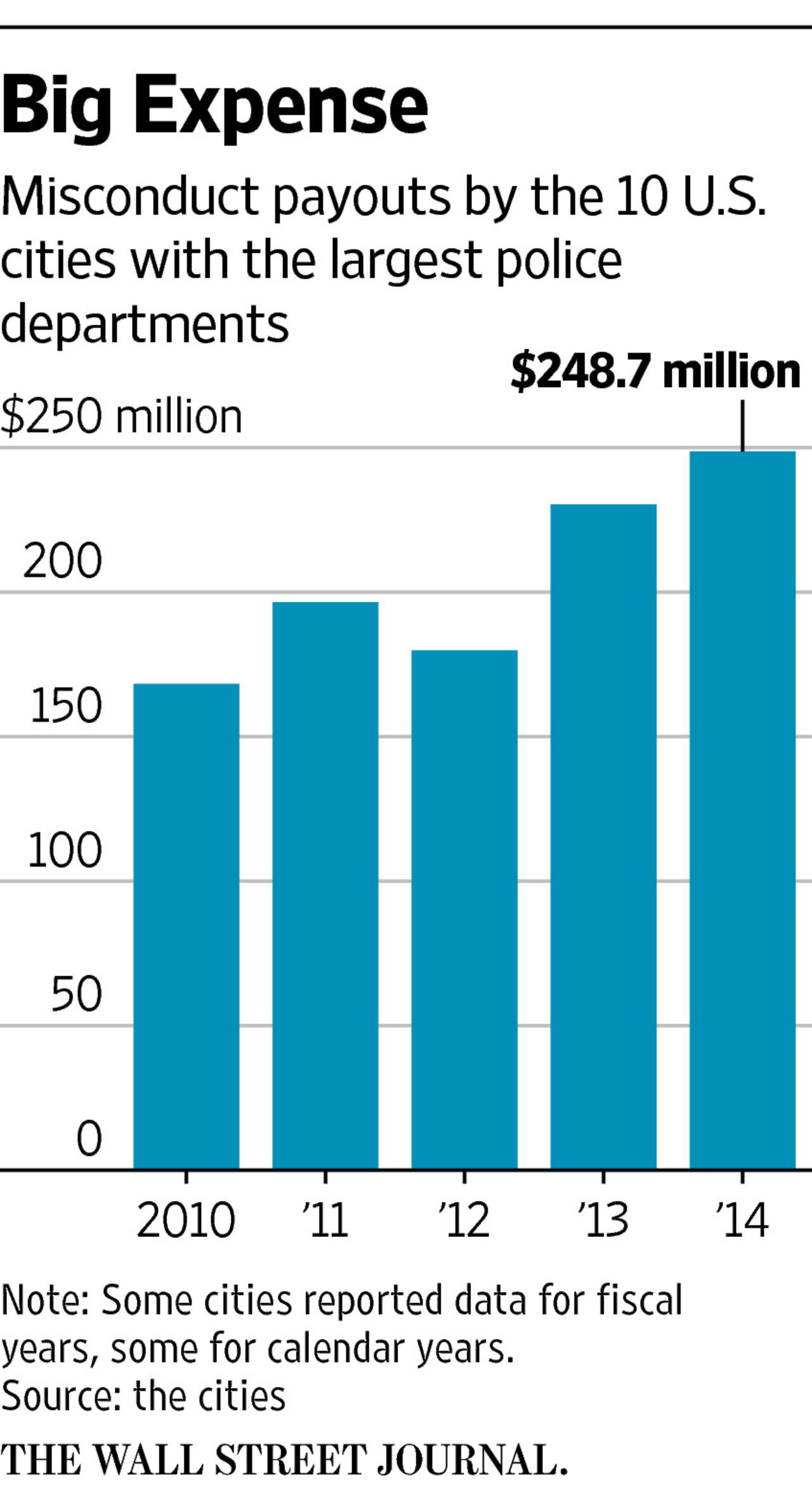 Laquan McDonald was shot and killed by Chicago police last October after officers responded to reports of a man breaking into vehicles. A police account contained in the coroner’s report said the 17-year-old had lunged at the officers with a knife. Lawyers for his family say they obtained a video from a police dashboard camera that shows an officer shooting the teen 16 times as he walked away from the officer. In April, before his family filed a lawsuit, the city agreed to a $5 million settlement.

Michael Robbins, one of the family’s lawyers, says the video was “the factor” behind the city’s willingness to settle quickly, along with “what’s going on in the nation right now.”

Chicago Corporation Counsel Stephen Patton,who heads the city’s law department, characterized the $5 million payout as “comparable to other settlements in fatal shootings in which the evidence in support of liability weighed strongly in favor of the decedent.”

A lawyer for the officer who shot Mr. McDonald said his client was “protecting himself, his partners and others.”

Dallas paid out $3.4 million in misconduct cases in 2014, compared with just $200,550 in 2010. Chris Bowers, a lawyer for the city, said Dallas had moved more quickly to settle cases over the past two years “if we believed at the end of the day that the city will be liable.”

“Up until recently, when it came to civil lawsuits, there were two groups that had a distinct advantage, where you had to knock them out to win. And that was doctors and cops,” he says. “But with the advent of video, and the changing perception of society, I don’t think police are held in the same regard.”

Last year, Mr. Tittle negotiated a $1.1 million settlement from the city in a case brought by Ronald Bernard Jones, who was arrested in 2009 on aggravated-assault charges after a confrontation with police officers. According to the lawsuit, camera footage didn’t back up police claims that Mr. Jones had attacked officers after they stopped him. Mr. Jones alleged he was beaten and falsely arrested. Charges against Mr. Jones eventually were dropped.

Mr. Bowers, the city lawyer, said the city council decided the settlement was in Dallas’s best interest. Neither the city nor the officers admitted liability.

Not all the departments surveyed showed an increase in misconduct payouts. Phoenix, Los Angeles and Baltimore, for example, showed declines. But insurers and lawyers who defend police say current scrutiny of law enforcement is broadly affecting the resolution of lawsuits. 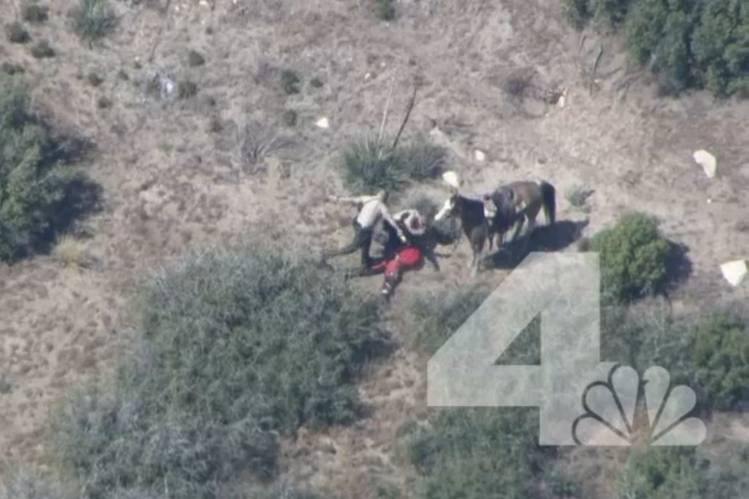 After a news helicopter in April took video of sheriff’s deputies in San Bernardino County, Calif., beating Francis Pusok, who had tried to escape on horseback, the county reached a $650,000 settlement with him. PHOTO:KNBC-TV/ASSOCIATED PRESS

“We’re there to protect our members,” saysJoanne Rennie, general manager of Public Agency Risk Sharing Authority of California, a risk-sharing pool. “However, when there is such a level of attention to the—I’m hoping few and far between—bad actors, it makes it more difficult to pull a jury pool that’s willing to consider just the facts and not just the dramatic aspects.”

Robert Shannon, a former city lawyer who defended police in Long Beach, Calif., and Los Angeles, says that in the 1970s there was a public presumption “that the police officer was correct in what he was doing.” Now, he says, “things have changed substantially.” Cases like the police killings of Michael Brown in Ferguson, Mo., and Mr. Garner in Staten Island, N.Y., he says, could influence juries.

Taxpayers foot the bill for settlements one way or another. Cities such as New York, Los Angeles and Philadelphia are self-insured, meaning any payouts come out of city funds. Others have insurance that kicks in at a certain payment level in each case. Smaller municipalities often pool risk with others, but the cost of premiums can increase after incidents occur, much like car insurance. It is almost unheard of that officers pay out of their own pockets, according to a 2014 study on police liability by Joanna Schwartz, a UCLA law professor.

Cities are cutting more checks to people who were wrongfully imprisoned years ago because of police misconduct. As more wrongful convictions come to light, jury verdicts have risen, with some now exceeding $2 million a year behind bars.

New York City agreed last year to pay $41 million to five black and Hispanic men imprisoned for the 1989 beating and rape of a jogger in Central Park, then freed after another man confessed and DNA evidence confirmed his story. City lawyers under former Mayor Michael Bloomberg had fought a lawsuit brought by the five men, which alleged that detectives coerced confessions from them as teens. Under current Mayor Bill de Blasio, the city agreed to a settlement equal to about $1 million for each year each man spent behind bars.

New York City Corporation Counsel Zachary Carter said the settlement “should not be construed as an acknowledgment that the convictions of these five plaintiffs were the result of law-enforcement misconduct.”

Chicago has been trying to resolve cases stemming from allegations that detectives, led by former commander Jon Burge, tortured black and Hispanic suspects with implements like electric cattle prods, coercing confessions from them and putting them behind bars from the 1970s to early 1990s for crimes they didn’t commit. Those cases have cost the city more than $60 million in payouts. In May, Chicago launched a $5.5 million reparations fund for some of the victims.

A Chicago police spokesman called Mr. Burge’s actions a “disgrace.” Mr. Burge was convicted of federal perjury and obstruction charges in 2010. Mr. Burge, who has been released from prison, declined to comment.

In New York, settlements and judgments in misconduct cases hit $165 million in fiscal 2014, up from $93.8 million in 2010. Both New York and Los Angeles, which paid out $10.7 million on such cases last year, now are tracking claims more closely and trying new approaches to risk management.

New York City’s government-run hospitals were for years the city’s leading source of liability payouts, primarily because of medical-malpractice settlements. But beginning in the 2010 fiscal year, the police department surpassed the city hospitals in total liability payouts.

The trend caught the attention of New York City Comptroller Scott Stringer, who launched a program to track legal claims called ClaimStat. “Instead of accepting rising claims and settlements as the cost of doing business,” Mr. Stringer says, the city can use the data to identify underlying problems and make changes to prevent future suits.

The number of new claims filed against New York City police, including allegations of police misconduct and damage from car crashes, rose 71% between 2004 and 2013, according to the comptroller.

“While the filing of a lawsuit does not prove any misconduct on the part of an officer, the department is aware of the increasing number of actions filed against the NYPD,” a spokeswoman said, adding that the department is “addressing these very real concerns” with the creation of a risk-management bureau and police litigation unit.

The settlement with Mr. Garner’s estate came nearly a year after his confrontation with officers who accused him of selling untaxed cigarettes—a scene captured in a widely viewed video. Mr. Stringer said the settlement “acknowledges the tragic nature of Mr. Garner’s death while balancing my office’s fiscal responsibility to the city.”

The impact on smaller cities can be more dramatic. According to Ms. Schwartz’s study, which tabulated civil-rights payouts in 44 large police and sheriff departments from 2006 through 2011, Albuquerque paid out the most per officer—more than $2,000 a year over that time.

The city of about 550,000 has had a high number of fatal police shootings and has spent more than $25 million on civil-rights and police-misconduct settlements over the past five years, with annual payouts nearly quadrupling over that period. Earlier this month, Albuquerque officials reached a $5 million settlement with the family of James Boyd, a mentally unstable homeless man who was shot by police in 2014 in an incident captured on video.

Last October, the city agreed to change how its officers use force in a settlement it reached with the Justice Department, which said it found a widespread pattern of excessive and sometimes lethal force by officers.

Albuquerque officials say the city has been bracing for more settlements and has had to allocate funding it could have spent on raises for employees, parks and other municipal projects to cover the payouts in police cases.

“Any time you are putting more money into a risk-management fund, you are taking away money from somewhere else,” said city councilor Ken Sanchez. “Having to put more money into that fund to pay for the lawsuits has really been challenging.”

Write to Zusha Elinson at zusha.elinson@wsj.com and Dan Frosch at dan.frosch@wsj.com