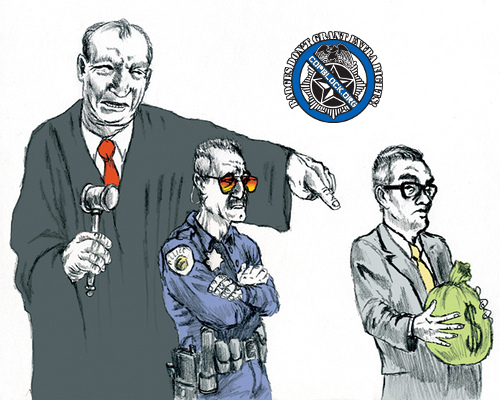 It’s no secret that revenue generation is the name of the game for law enforcement and the courts these days. However, as has been pointed out previously on CopBlock.org, Las Vegas and the State of Nevada are particularly prone to such piracy. Now a lawsuit filed in Las Vegas aims to put an end to that.

The lawsuit stems from the case of Eric Siegler, who had warrants for “fix-it” tickets that he attempted to have a lawyer quash in April, so that he could resolve the original tickets. Instead that lawyer, Craig Mueller, was told that Siegler would have to pay $450 in fines before his case could even be heard by a judge.

Eventually, Mueller was able to get Seigler’s case before an elected judge without paying what is (correctly) described by the attorney as an “extortion fee.” At that point, Municipal Court Judge Martin Hastings not only quashed the warrants, but also waived the original fees. However, the city attorney’s office then filed a motion against Siegler “to clarify the process leading to quashing of bench warrants.”

Mueller responded to that motion with the lawsuit on behalf of Siegler. In the suit, Siegler charges that the court levies unconstitutional fines and extracts hefty fees from poor defendants. It’s alleged that this is a purposeful strategy to take advantage of those least able to fight back against those policies in order to generate revenue through the court system. In addition, it states that the court denied constitutional due process rights to Eric Siegler in regard to his warrants.

According to the Las Vegas Review Journal, City Attorney Brad Jerbic declined to comment on the case, because litigation is pending.

In that same article, Mueller summarizes the way the courts operate:

That’s why he hopes Siegler’s legal challenge — set to be heard by Hastings on July 22 — can force the court to change its ways.

“My hunch is (traffic court) is designed to do exactly what they’re doing with it: To make sure you don’t get to a judge and you get screwed out of these outrageous fines,” he said. “I think we can force them to rethink it.

“If nothing else, we can embarrass them into changing it.”

A good portion of the LVRJ article, outside of the part discussing the lawsuit, is a rehash of the previous criticisms of the revenue generation tactics of the Las Vegas Municipal Courts already detailed in my earlier post. However, there are some interesting things brought to light by this article. One is that (unnamed) court officials are actually quoted referring to the courts as “our business.” Another is the fact that, although the number of cases filed in the Municipal Court have dropped by over a third (36%) since 2003, revenue has increased by 124% in that time. The vast majority of that is due to secondary fees and charges not related to the original charges, which often add up to several times the original amount.

Another example of how well Las Vegas residents are being served by their elected representatives is that Councilmen Bob Coffin and Ricki Barlow, who collectively represent five of the poorest areas in town (by ZIP code), are not too worried about the impact this is having on their constituents. Although Coffin can’t even recall the reason for appointing unelected traffic commissioners to essentially act as judges, he states, “I’m comfortable with the traffic commissioners to the extent that I can be.”

The fact that the courts operate like the worst mob-run weekly payday loan sharking operation, designed to keep people on the hook for months, if not years, is disgraceful in and of itself. Its use of unelected “traffic commissioners” and the requirement to pay these exorbitant fees before you even have an option to be seen by an actual judge, is downright criminal.

And those “community leaders” who just aren’t that concerned about the way the communities who elected them are being fleeced by this racket should be put out on the streets with the rest of the garbage in this city. Without the ability to hire a lawyer, it’s almost impossible to fight against this type of thievery and that’s precisely why poor people, who lack the money to do so, are being targeted. Of course, low income residents are also the least able to afford this financial treadmill. The people who supposedly represent them shouldn’t be comfortable with that.