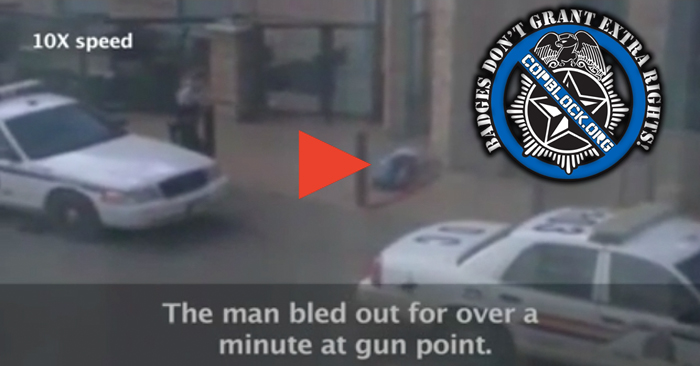 Last Thursday members of the the Anonymous activist group, known mostly for their hacking and Guy Fawkes masks, held a protest over the proposed ‘Site C Hydro-electric Dam‘ in Dawson Creek. Police were called to the scene when a member of the group began turning over information tables set up by BC Hydro, who are behind the proposal.

The Royal Canadian Mounted Police responded to the scene where they shot a man in a Guy Fawkes mask who was allegedly holding a knife outside the building where the original disturbance had occurred. RCMP initially thought the man they shot, and killed, was the same man who had caused the disturbance, but this turned out to be false.

A video of the scene just moments after the shooting (below) shows the man bleeding to death while RCMP stand over him with their guns still aimed at the dying man.

The shooting is still under investigation and no evidence has been submitted showing the man was armed with a knife or threatening officers.

It took almost no time for the Anonymous community of hactivists to respond to the shooting. Immediately message boards and social media began buzzing about the shooting. Now members of the group have ordered Operation Anon Down:

To this end Anonymous announces the launch of Operation Anon Down. The focus of this Op going forward will be gaining justice (and vengeance if necessary) for our fallen comrade in Dawson Creek. But we will also memorialize our previously slain brethren, and prepare to take action for future Anons killed by police – as we have no doubt they will cut down more of us.”

The group plans to identify the officer who fired the shots, doxx him, and press the Canadian government to have him fired and brought to justice for the killing. They claim that if the authorities will not cooperate with their search for justice they will instead ‘get revenge’ for the death of their member.

Since the BC Internal Investigations Office has only found criminal culpability in 6 out of 121 cases of death or injury by police, it seems unlikely justice will be served for the still unnamed man that was killed.

The protest that began the situation was part of an overall reaction to the government subsidized corporate energy schemes that put profit before environmental concerns. The same multinational corporations profiting from the hazardous unrenewable energy sources are those whose influence has taken over local governance around the world and helped create a global police state designed to protect the ruling classes and enforce their agendas. Stories like this seem to be clear evidence of how the words law enforcement systems have been co-opted by the money and ideas of global oligarchs, and how those who are tasked with protecting citizens will actually kill them if they step out of sync with the bottom line of multinational industrialists, corporations and banksters.