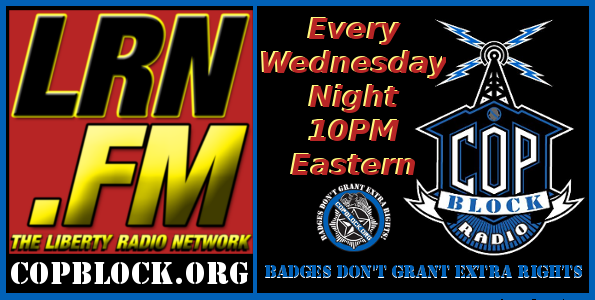 On our most recent show we had a Selectman from Alstead, New Hampshire on CopBlock Radio. He is supportive of CopBlock and is on record as defending gun rights in his community. Chris Reitmann was on hand to discuss a situation at a local pool, whereby a few guys came carrying firearms and were asked to leave. Chris found out they were on public property and could not be asked to leave. New Hampshire is an Open Carry State which means people have the right to openly carry firearms in public. Chris would like to revert all gun laws in his community back to 1763, when Alstead was first founded as a city in New Hampshire, a decade before the Revolutionary War and any constitution.

Next we discussed the video released of police in Gardena who murdered a bicyclist on camera. The video clearly shows the police open fire on one suspect regardless of the other people surrounding him. They wounded one cyclist and killed another. The police were fighting the release of the video, but since the city had to pay a settlement in the case, a judge determined the video should be available for public consumption.

Plus we talk to Nate, from Texas, who is a frequent caller. Tune in Wednesday nights at 10pm for the CopBlock Radio Show. Live every Wednesday on LRN.FM. Join Derrick J and me, for all the latest news in police accountability. See you next Wednesday!