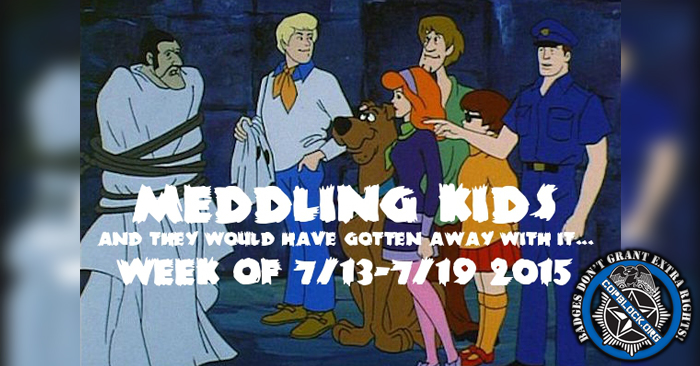 Sunrise Police Officer Threatens to Kill Wife,
Dump Body in Everglades, BSO Report Says
“According to the report, Gravelle’s wife said her husband “threatened to shoot her, kill her, dump her body in the Everglades and then kill himself while pointing a gun at her chest.” She said that she didn’t call 911 because she was afraid of what he might do.”

Restraint of Inmate Without Food is Part of a Troubling Pattern,
Sheriff’s Watchdog Says
“The inmate was then placed in a restraint chair and handcuffed to the chair for about 32 hours, McDonnell said. He received no food and only a single cup of water, though he did receive medical treatment, according to information released by the Sheriff’s Department. Ten jail employees, including three supervisors, were relieved of duty, and a number of others were reassigned.”

Cops Arrest Apparent Metalhead After His Fake Bullet Belt
Sparks ‘Panic’ on Boston Bus
“Prosecutors on Monday dropped charges of unlawful possession of ammunition, unlawfully carried dangerous weapon and disorderly conduct against Young after determining the ammunition “could not and weren’t intended to be fired’.”

Authorities Search Chief’s Home and Office in Probe Involving Underage Girls
“Some of the texts were sexually explicit like “You have a nice body” and other comments far more graphic, according to the warrants. In one case, he sent her a photo of himself holding handcuffs with the message, “One of these days hahaha,” authorities said.”

OKCPD Officer Officially Charged in Canadian County
(see original story here)
“The argument became heated and authorities allege Driskill put a gun to the victim’s head and threatened to shoot her. The next day, the affidavit states the victim was sitting on a stool when Driskill allegedly pushed her, causing her to hit her lower back on a step by the bathtub.”

Police Misconduct in Cedar/Riverside July 14th, 2015 [VIDEO]
“Last night me and a friend walked up on two squad cars pulling over a young Muslim couple. As we approached we heard one of the officers, a woman, yell at the woman suspect to, “shut up, bitch. Go back to your own city.” We immediately started filming with our phones, at which point they told us they were holding the couple as shooting suspects and that we should be thanking them.”

Man Says He Sees Deputy Speeding Over 100 MPH, Catches It On Video
“I think nothing more than him getting a ticket for doing an excess of 100 mph, the same should happen to him that it does for anybody else and that’s all,” Parrish said. “It puts out there that Columbia County police are above the law and they’re not.”

Police Departments Can Be Sued For Deleting Comments?
“The complaint filed in the United States District Court by attorneys Richard Holcomb, Alan Beck, and Brian Brazier alleges that the Honolulu Police unlawfully administer their Facebook Fan page in violation of American citizen’s right to free speech. The complaint asserts that the Honolulu police arbitrarily moderate the page by deleting comments and banning users who post or make comments unfavorable to the department. The complaint further asserts that online speech is just as important as a citizen airing their grievance in a public park – just because the speech is virtual, doesn’t mean it is not protected.”

Police Kill Aggressive Escaped Pig in Woodbine
“Police on Monday shot and killed a pig that attacked a neighbor’s dog and was “acting aggressively,” ending a 12-year-old local boy’s 4-H project on the eve of the county fair.”

5. Man Puts “Do NOT Talk to Police” Advice to the Test (VIDEO)