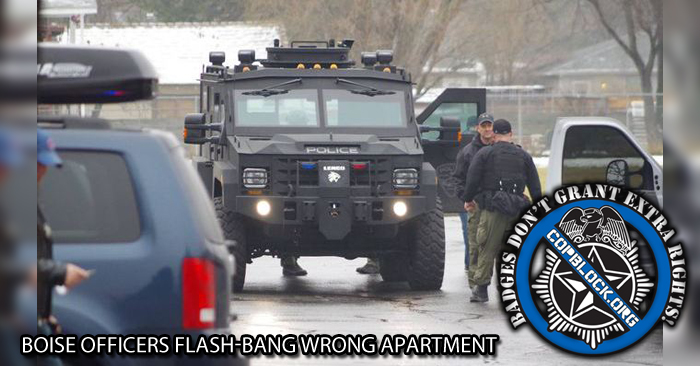 Boise Police and Swat were serving a warrant inside an apartment building on July 16th for theft and drugs.  They busted down the door and threw a flash-bang into the apartment unit.  The only problem was, it was the wrong address.

Police Deputy Operations Chief Eugene Smith said Friday the error “is rare and certainly regrettable.” He says officers apologized to the apartment occupants and began to do “all they could to make it right, including paying for repairs and securing the apartment.”  Smith also stated that they are investigating the incident to ensure that it doesn’t happen again.

Stories like this one are becoming all to common over the last few months.  Officers are getting warrants and going to the wrong place and tearing up people’s homes.  For Chief Smith to say that this occurrence is “rare and certainly regrettable,” is a flat-out lie.  It might be rare for that department, but this is happening more and more across the country.

The militarization of our police forces across the country and their never-ending desire to bust heads has placed a dark shadow over them and caused the current mistrust and dislike for our police.  They show no regard for the safety of the citizens that they have been charged with protecting, which shows in how sloppy they have become in the basics, such as verifying what address they are supposed to be raiding. The residents of that apartment are lucky to not have been injured or killed due to the negligence of these officers.  Paying for the damage is a start, but what really needs to happen is a full-scale investigation into the officers that took part in this raid and determine why they assaulted the wrong citizens, and then discipline them.

Consider contacting your state representatives to bring legislation to the table that would hold officers accountable for these types of negligent acts and allow citizens to defend themselves from such attacks.  Indiana has already done this and it is time for the citizens across the country to have the same right to protect themselves from these armed thugs.