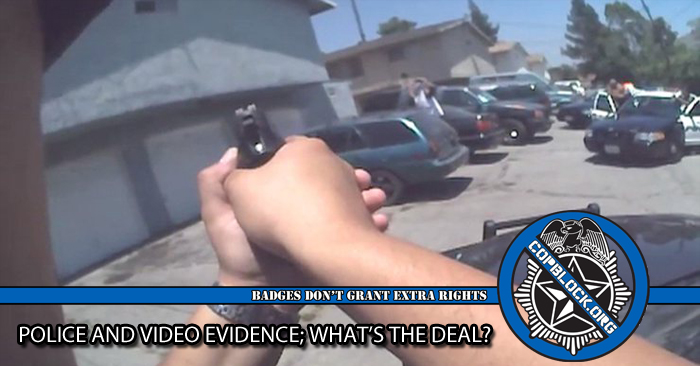 With the advancements in technology it’s common for nearly every single person to have the ability to record a moment and then share that moment with millions of people almost instantly. From a baby’s first steps, a birthday greeting from afar and so on, any moment can be saved or shared with whomever, thanks to technology. Most of us have experienced the benefits of this and our lives have adapted to such luxuries. In fact, we probably share too much, too often, and without much thought to it. Just hop onto your Facebook account and scroll your news feed and you’ll see a few subjective life moments from your friends’ posts. I guarantee it.

I bet you’re starting to wonder, “What the hell is Ademo getting at and what does video technology, the ability to share it, and people posting their snippets of life for the world to see have to do with police accountability?” The issue I’d like to bring to your attention is regarding police and video evidence. In a world where everyone else on the planet shares video quickly and openly, the police have managed to effectively straddle both sides of the issue – depending on how it suits them.

There are times when the police will release dash, body, or security camera footage immediately. Take the case of Samuel Smith, 27, who was shot and killed by Seattle Police on Friday morning around 4 a.m. In less than 24 hours the police released the dash camera footage (see video below) which showed Smith charging at an officer with a knife in his hand (after he already ran another officer off the road). Or the case of James Michael Todora, of Las Vegas, who was shot by a LVMP officer after he reached for a loaded handgun when he became upset about his frequent police interactions. In both these cases the video was released in under a week’s time.

Yet, this isn’t always the case with police video evidence and it’s actually quite rare. On June 2, 2013, the Gardena Police received a call about a bicycle stolen from a drugstore. A few Gardena police officers encountered 3 males on bikes within the area and immediately stopped the men for questioning. With guns drawn, the Gardena police officers yelled at the men to put their hands up and to stop moving. One the the men, Diaz Zeferino, wasn’t responding entirely to officers’ demands, so three of the police opened fire. For over two years the City of Gardena, on behalf of its police department, argued in court to keep the video from being released publicly. Finally last week a judge ruled that the video must be released to the public, noting that if the taxpayers had to pay the bill on the settlement then they had a right to know what they’ve paid for.

It’s painfully obvious that the police will, within hours, release footage to the public – without regard for any pending investigation, names or tainting of a trial – when the footage vindicates an officer’s actions, but they will hide, delay, tamper with, or destroy any evidence that’s unfavorable to them. The City of Gardena spent hundreds of thousands of taxpayer dollars attempting to keep the video out of the public eye – and that’s on top of the millions of taxpayer money that went to the families in the settlement. So why are we allowing the police to subjectively use video evidence as they please?

I’m not one to advocate forcing the police to have to do x, y or z. So I won’t conclude with a statement such as, “Police should be forced to produce their footage to the public within ten days” or something as silly. It just seems logical that if the 12 year-old down the street can post about the bully in the neighborhood in under 5 minutes, the police would have no problem producing the same. I bet a consistent policy on video releases will not only help keep tensions down between police and a community when an officer makes a mistake but would also help keep officers in line in general. Since I don’t think that will ever happen, I’m going to keep my camera at my side and suggest you do, too. I don’t want to wait two years to have the body camera footage, that’s for sure.