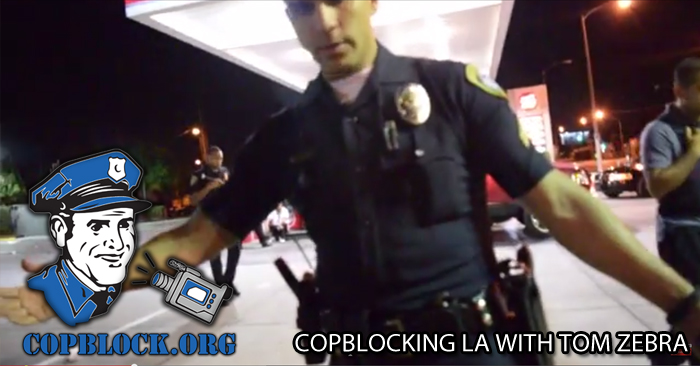 While I was in LA for an Immortal Technique concert, I was lucky enough to meet up with Tom Zebra and Cop Block the LA area with a local legend. I think it’s crazy that Tom Zebra has been filming the police since the early 2000’s. He started with a Sony camcorder and it wasn’t long before he had a box of VHS tapes that no one wanted to see. Once he was even arrested for trying to show the police a video of their misconduct. He now moderates his youtube channel, and the website www.mistakenbacon.com

Tom can remember being ostracized and made fun of for police accountability activism well over a decade ago. “It wasn’t something that was appreciated,” he said. “People made fun of you.” Now it is just as likely for the person involved in the stop to recognize him as Tom Zebra as it is that they will be upset that he is filming.

His original intent was to protect himself, but unlike me Tom was led to film the police out of his own creativity. I actually had never thought about it, regardless of the amount of times I had been harassed, and if it weren’t for Cop Block, I may never have started.

Tom picked me up from the concert and we traveled to Gardena, an area Tom likes to take people to when he brings them cop blocking.  The cops are usually laid back and it’s a good place for him to gauge a cop blocker’s experience.

We came across a traffic stop where the cop had pulled someone over. They asked the driver to get out of his car. Regardless of the fact that he was compliant they put him in a stress position for the few steps from the car to the curb. One officer asked him questions while the other tore through his car. He started pulling footwear out of his trunk and making jokes about it.

After they let the man go I asked if they gave him a citation, and what the reason for the stop was. They declined to answer my questions, Tom and I said good night, and we left. Tom mentioned to me that those two cops would never have refused to tell him what the reasons for stops were. It also gave him suspicion that they only pulled the driver over due to the fact that he was black, and he was on parole.

While cruising and listening to the scanner we heard that a high speed chase was happening. Tom is crazy good at listening to his cell phone scanner and anticipating how events will unfold. We tried for 20 minutes to find the chase but in reality were just doing smaller circles inside of their big circles. At times the chase was going in excess of 100 mph.

We gave up the chase just as a some cops were pulling into an Inglewood gas station. We thought they were going to mess with someone getting gas; in reality someone had just been shot in the gas station. We took up positions out of the way, but the police used tape, and the excuse was that they were widening the crime scene to keep us as far back as possible.

Tom had parked his car in the gas station, as it was unclear to us how severe the stop would be. He was talking with one officer when another officer came up to me and told me to leave. When I told him I was staying if Tom was staying, he grabbed me, turned me around, asked me if I wanted to be in handcuffs, and then challenged me to a fight. I was concerned about spending the night in an Inglewood jail, but Tom Zebra is the cop whisperer. He walked up to this cop and the cop let me go, saying something about courtesy.

One of the local kids was arrested for being drunk in public after he picked up the yellow roll of caution tape. No one understood why, as he didn’t try to steal it–just handed it back to them. After that concluded it was after 2 a.m., so we retired for a few rum and Cokes and to conduct an interview.