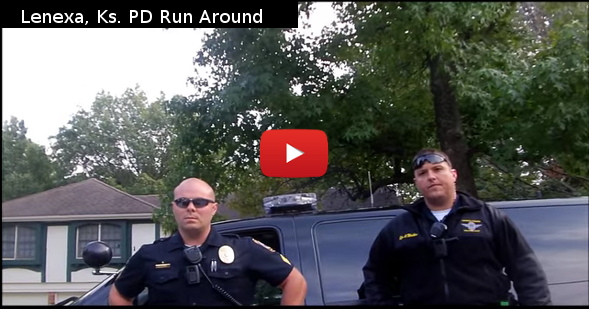 Here is a humorous exchange between KCK CopBlocker Danny and the Lenexa PD.

Over the police scanner I heard a call go out to officers for a woman that had been stumbling around a department store. At about 1:24 of the video I step out of my vehicle and stand next to it as I hear one officer ask to search the contents of the woman’s purse. It was an attempt on my part to get a closer view of the search. NOTE: I did not move from the side of my vehicle until one of the officers made contact with me by asking me “what’s up man” at which point I asked “What’s going on here?” I was told it was none of my business (Note: that I did not press to find out details). At about 1:50 the officer asks me “you teach your son stuff like that” implying that teaching your children how to hold police accountable is not a worthy subject to be taught. Interesting how prideful officers don’t think it’s a necessity in this day and age to film police for accountability purposes. Did I interfere or was I was I spoken down to?

Note at about 3:45 the supervisor initiated contact even though he denies it later.  Watch the video for our interaction.

What you can learn – Lenexa PD does not partake in the Johnson County DUI checkpoints – See the video as to why.

Emergency vehicle laws for Kansas
Backing up on a side street is NOT against the law!!
There is a misconception about me and complaints. I do not file them because I am not a Statist. I do not care to file complaints. I only care to expose the double standards of officers. I follow them so that I can catch them breaking their own laws and infringing on the rights of people through deceptive “investigation” tactics. KNOW YOUR RIGHTS!! Traffic officers are not there for “safety”, they are there for revenue. Preemptive Legislation is a BS way of extorting money from the poor, straight off their tables. It is A WAR ON THE POOR and officers like this are on the frontlines.