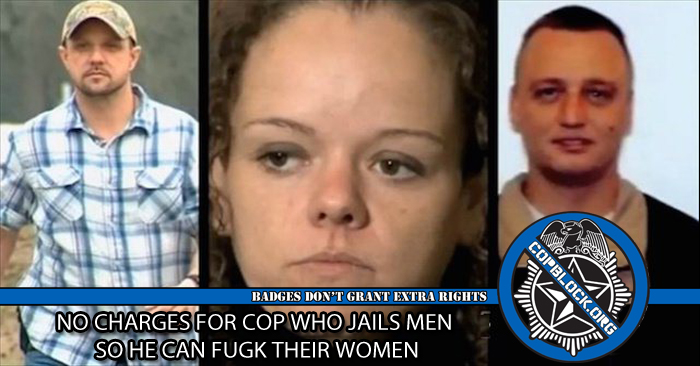 A Cowetta County, Georgia District Attorney, Peter Skandalakis (Scandalous) has said that his office will not pursue charges against an officer who used his special badge powers to have several men arrested and thus detained while he dawdled their romantic partners.

Luthersville Police Department Officer Eric Mischel became involved in several affairs with women in relationships with men whom he violated to achieve these trysts. Even though an investigation has revealed a mountain of unscrupulous and unlawful behavior, he will not be charged because D.A. Scandalous says he was unable to find evidence that he broke his oath of office.

That oath includes abiding by the laws and constitution of his country, state and community. There is no doubt that false imprisonment, kidnapping and a host of other related crimes counts as a failure to uphold his oath. Yet that is beside the point. He broke the law. Several laws. The only measure of his guilt should be just that, not some measurement of his actions against the oath he made as an officer. This clearly shows a second set of laws are in place that allow the privileged and their mercenaries to circumvent the justice system they perpetrate on us regular citizens.

A WSB TV News investigation this past May highlighted some of the lurid details:

The story started back on Nov. 22, 2013, when records show that Mischel arrested Coley for stealing a water heater and taking it to a scrap yard.

Coley, behind bars said that’s when Mischel made his move. “That very day they actually went out, and she ended up spending the night at his house,” Coley claims.

His former girlfriend [Ashleigh Wilkinson] backs up his story.

“He says, ‘This is pure speculation, but I’ve got reports that you have been waving a gun at someone.’ And I said, ‘Eric, I don’t own a gun, don’t have a gun, don’t want one. Your information is incorrect, I did not do that,’” Coley told Byfield.

“I said, ‘Eric, by the way, since we’re asking each other questions, I heard that you have been sleeping with my girlfriend.’ He denied it and his face got real red,” said Coley. “He got embarrassed, and I think that’s kind of what stirred up the hornets’ nest, if you will.

Bruce Coley is one of the men that Mischel has used his authority to harass for really fucking creepy purposes. It was he who helped the journalist conduct the initial investigation that led to the DA’s irrational dismissal of Mischel’s crimes. During the investigation it was discovered that two other men had been treated similarly by the deviant officer.

One man told the GBI he thinks he got arrested for terroristic threats because he “feels that due to the fact that Officer Mischel was having a sexual relationship with Brenda Gaddy, Officer Mischel took Tyler Gaddy’s word and arrested Lewis falsely.”

Another said “(When) Goodine and Coleman were living together, Coleman became involved with Luthersville Police Officer Mischel in some type of sexual relationship. In 2010, Goodine was arrested and charged for stalking.

Mischel was neither disciplined for his poor character, misconduct and criminal actions, nor is he facing any legal repercussions of his libidinous crime spree. I hope he wears a condom more seriously than he does a badge. Or rather, did. On July 8th he left his job, likely as a compromise with officials who let this man use his badge as the ultimate cock blocker and get away with it.

Besides highlighting how differently criminal cops are treated for their crimes, it also illustrates just how complicit prosecutors and district attorneys are in maintaining an unbalance, unequal and unfair justice system. Their apathy, collusion and corruption regarding the law in realm of law enforcement is vastly different than the shark-like viciousness they show towards everyday people who commit victimless crimes and are punished ruthlessly.

It is quite likely that Mischel will soon become a parasite on another host community while scumbag district attorneys like Scandalous will continue worming their way through their local legal systems, feeding on the carcass of justice, whose death they have revisited countless times over in their own petty, greedy, fearful, bigoted, self-serving, envy-stricken lives.