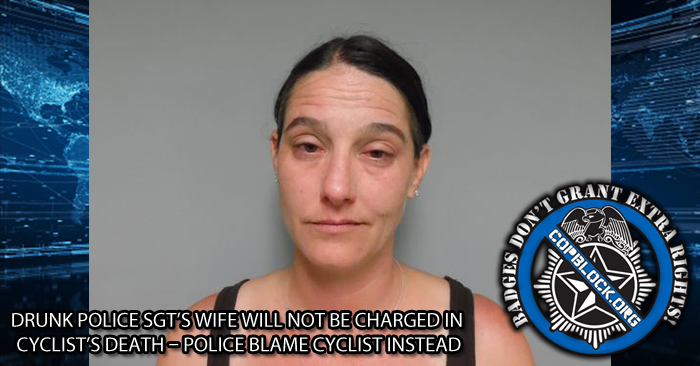 MIDDLEBURY, Vt. – Imagine that you just received the news that a loved one was hit and killed by a drunk driver. It’s probably the worst news that anyone could receive, unless of course the murderer is married to a sheriff’s deputy and will walk free.   When officers arrived at the scene of the deadly crash of June 17, they were quick to notice that the driver, Holly Gonyeau, smelled of booze and that her eyes were bloodshot and watery. During a sobriety test, it was revealed that her blood alcohol level was .087 and she admitted to taking Xanax.

Despite investigators’ acknowledgement that Gonyeau was driving impaired and had crossed the center line, they placed the blame squarely on the 60-year-old cyclist, Dr. Ken Najarian. Of course, Addison County State’s Attorney David Fenster says that Gonyeau isn’t receiving special treatment because her husband is a law enforcement officer. Though Gonyeau is married to SGT Keith Gonyeau of the Williston Police Department, the State’s Attorney claims that he made his decision not to file charges because the cyclist had performed “an abrupt U-turn’ in front of Gonyeau.

“The family is distraught over what happened today,” said Ben Luna, lawyer for the cyclist’s family. “We’re deeply concerned that there are issues in the judgment of those who investigated this and misciting the law. This was not Dr. Najarian’s fault.” He also stated that the investigation is far from over, calling the affidavit “troubling” and “grossly inaccurate.” He vows to re-examine every step law enforcement took investigating the case.

Gonyeau will walk away after murdering an innocent person with only a DUI charge; meanwhile, Dr. Ken Najarian’s family will walk away with only memories and a lot of unanswered questions. The cyclist’s lawyer is pushing for upgraded charges like negligent operation or DUI with death resulting. He plans to hire an independent crash reconstruction expert to analyze the case.  The commander of the state police crash reconstruction team says he’s confident in his conclusion. Gonyeau is due back in court August 24.

It has long been documented that police take care of their own – including their families. More proof of this has recently come to light, thanks to a few applicants who appealed a police department’s decision not hire them.  A Civil Service Commission in Massachusetts recently disclosed that the Methuen Police Department refused to hire candidates based upon one question:  whether or not they would arrest a fellow officer or a family member for a DUI.  The Civil Service Commission for the city wrote that they were dismayed to learn that the police department gave higher points to applicants who said they wouldn’t arrest a family member or an officer they knew, while docking points from those who said they would.

968
SHARES
FacebookTwitterGoogleRedditTumblr
DiggLinkedinStumbleuponMailPrint
You Can Support Cop Block by shoppping on Amazon using the banner below:
BANNERS ARE CLICKABLE