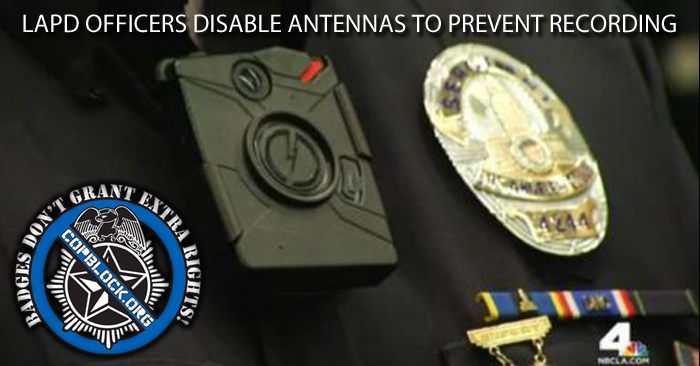 I have been asking this ever since the body camera programs started popping up in police departments around the world:  What is the penalty for disabling the cameras and equipment? My question has gone unanswered for several years now, and I have asked several police department officials along the way. The LAPD was kind enough to provide the answer for me, which I had suspected anyhow:  Nothing. No penalties for officers who disable their camera equipment.

Our friends at Counter Current News reported on a story out of LA in which 72 antennas were removed from police cruisers by officers. These antennas are responsible for recording the body camera and audio systems that record officer interactions. Moreover, the cars that have the antennas removed are used to patrol the inner city. Areas such as Watts and the Jordan Downs and Nickerson Gardens housing projects. Counter Current reports:

The Los Angeles Police Department is coming under fire after it was revealed that police officers have been routinely tampering with video and voice recording equipment.

The department is often at the center of controversy and police brutality protests, making the disabling of dozens of patrol cars’ monitoring systems even more problematic.

What’s more disturbing to me is where the answer to my question lies. The LAPD officials didn’t think it worth the time to investigate what was happening! The LA Times reported that:

LAPD Chief Charlie Beck and other top officials learned of the problem last summer but chose not to investigate which officers were responsible. Rather, the officials issued warnings against continued meddling and put checks in place to account for antennas at the start and end of each patrol shift.

Members of the Police Commission, which oversees the department, were not briefed about the problem until months later. In interviews with The Times, some commissioners said they were alarmed by the officers’ attempts to conceal what occurred in the field, as well as the failure of department officials to come forward when the problem first came to light.

A spokesman for the department told the Times, “We took the situation very seriously. But because the chances of determining who was responsible was so low we elected to… move on.” So they are not even trying to cover it up anymore. The police state has come out in the open now because they do not believe we have the power to stop it at this point. This is why we advocate filming the police even if they appear to be recording.

So the answer, as if we didn’t already know, is typical of a police state that investigates itself. It just doesn’t even investigate anymore. This should serve as a warning to those who believe body cameras are the be-all and end-all answer to police brutality. Wake up, folks! Don’t wait until it happens to you or your family member. Feel free to call the Los Angeles Police Department and tell them that you think it is worth investigating what the fuck is going on with the antennas!