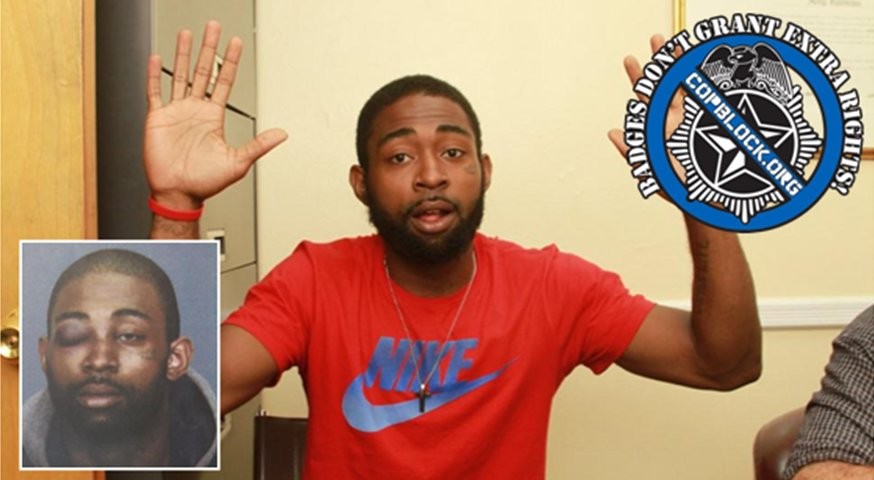 Video has emerged showing two NYPD officers punch and beat a man who was surrendering with his hands raised in a Brooklyn grocery store earlier this month.

Police say the July 7 incident followed an argument between 24-year-old Thomas Jennings and a New York Fried Chicken employee on Saratoga Ave. in Bedford-Stuyvesant over the price of two slices of pizza.

Jennings says he was dollar short, so he stepped outside and borrowed money from someone to cover the tab.

It was at this point, police allege, that an unidentified man with Jennings pulled out a switchblade knife, told the employee that he wasn’t paying and both men fled with the food.

The employee then called 911 and reported the incident.

Police say they tracked Jennings several blocks away to the Roslin grocery store on Bainbridge St. where surveillance cameras recorded what happened next.

The footage, which does not contain audio, shows officer Lenny Lutchman enter the store wielding a baton. He begins pushing Jennings in the chest as he subserviently stands in a surrendering posture with his hands raised.

Officer Pearce Martinez is then seen running into the store, and immediately starts punching the man in the head.

While being beaten, Jennings offers no resistance. He is handcuffed by Martinez while Lutchman is seen striking him with his baton in the back before elbowing his head into the counter.

Police claimed in reports that Jennings resisted arrest and was “flailing his arms” while being handcuffed.

He was charged with robbery and held without bail until July 13 when he was released after prosecutors did not present the case to a grand jury.

Jennings suffered bruising to his body and face, and cuts above his eye that required five stitches.

“It’s horrendous what they did to him,” lawyer Amy Rameau said. “He had his hands up. He didn’t pose a threat to anyone in that store. It was an absolute use of excessive force… police [saw Jennings] as an object, something to pound on.”

The Brooklyn District Attorney’s Office and NYPD Internal Affairs are reviewing the tape of the incident, but the robbery charge against the man is expected to be dismissed.

Jennings also has a pending lawsuit in Brooklyn Federal Court against NYPD officers from the 81st Precinct who allegedly fractured his eye socket while responding to a dispute with his ex-girlfriend.