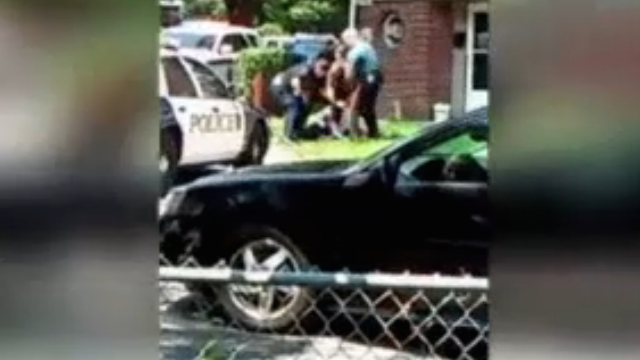 Chester City and Chester Township [Pennsylvania] Police recently joined forces as a tag team on the border of their jurisdictions to put the smack down on a developmentally disabled man, as shown in a new cell phone video that was posted Facebook by its creator, but has since been removed.

The victim of the beating, identified as Walter Moat, was driving the wrong way down a one way street when he was stopped by an officer investigating a home break-in. Rather than investigate that actual crime with actual victims, the unidentified officer begins to harass Moat.

Walter appears to be resisting the officers questions and commands, but was likely just stuttering and manifesting other difficulties present by his mental disabilities. For his inability to appease the whims of the vicious officer, he is quickly taken down and punched and kicked by the first officer and others arriving at the scene.

“He was lying on the ground and he was handcuffed,” said Taniece Day, a friend of Moat who witnessed the incident. “He was lying on his side. His face was all bloody. He had knocks on his head and the cops were kicking him, tasing him, punching him, throwing him on the ground, pulling his pants down.”

Police officials did not see the video until Tuesday night and have said they will review it on Wednesday to see if there is cause for an investigation into wrongdoing.

Meanwhile, Moat’s family still do not know where he is at, whether he is still in police custody or not, and what his condition is.

A police spokesperson said that a gun was recovered from Moats pocket, while witnesses say they saw no gun at any time during the beating/arrest.

Nobody has yet filed a complaint regarding this disgusting act of police brutality. If you are in the Chester area, please consider contacting the department and filing a complaint, or at least encouraging accountability in this grotesque crime.