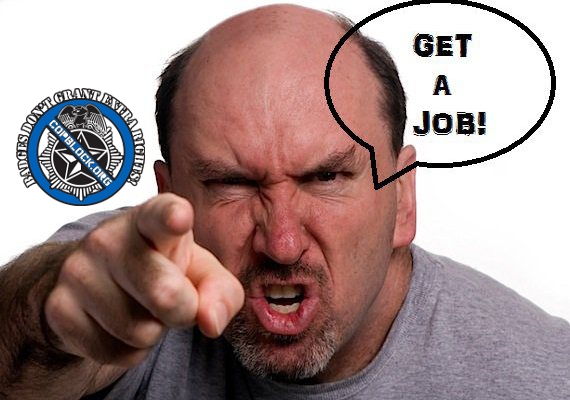 How many times have I heard that same sentence when someone doesn’t agree with what I do as an activist?  This is the monotonous rant many of us have heard when the one shouting it has no real argument against what we do on our own free time.  Many of our detractors accuse us of being a bunch of druggies that live off of welfare with a rap sheet a mile long.  That we just do this because we’re pissed off because we got pinched and want to make the system pay for ruining our lives.

The truth is, many of us including myself have real jobs and real responsibilities outside of our Cop Block activities.  Some of us have mortgages that need to be paid every month, kids to feed and support, bills to pay, and car payments just like anyone else.  Also, with the amount of law enforcement that visit the site, you’re welcome to look me up and you will see that the closest thing to a crime that I have ever done was get a speeding ticket in South Carolina on 4th of July weekend in 1995.

Before I get the point of this blog, I’ll give the readers a taste of my background.  I have held some type of job since I was twelve years old.  I started out like many teenagers, doing odd jobs to have a few extra bucks to do things that kids do.  I remained employed all the way through high school and then enlisted in the United States Army in 1987.

My service in the Army provided me the opportunity to live in Germany for three years before then being stationed in Illinois, Massachusetts, and then my final duty station of Ft. Bragg, NC.  I got out of the service due to a service-connected disability in 1995 when I had a parachute malfunction and free-fell 50 or so feet, which resulted in basically mangling my left foot.

After leaving the military, I enrolled at the Art Institute of Pittsburgh to study video production.  While studying there, I was employed as a writer, video editor, and ran the teleprompter during the 11 pm newscasts at WPXI channel 11.  After 2 years at AIP, I graduated with honors and moved to a little town in WV to work as a forensic video specialist and process-server.

After four years of seeing the corruption in the legal system on both sides, I had enough and left the firm that I worked for.  I did some contract work with my video skills for another year before going into my current job, which I have had for the past 11 years.  Five years ago, I went back to school full-time while also working full-time.  Two years later, I got another associate degree.  This time in business administration and graduating with honors again.

Two years ago, I was diagnosed with MS.  I was spending most of my time outside of work feeling sorry for myself and being angry at the bad hand I was dealt.  I sat on the couch and played way too many hours of COD and fought with strangers online over a stupid game.  I was a mess and even though I had a good job and owned my own house, I had no direction and was basically just existing.

Then a year ago, I started becoming more aware of police and government corruption around me and decided rather than sit around and bitch about it I would find a way to get involved to hopefully make a difference.  I saw some of the videos online of people who were videotaping cops that were more than heavy-handed with many of the citizens and decided to take a crack at it. So my point?  I get the impression that many think we spend every waking hour out there filming police and looking for trouble.  The truth of the matter is that many of us, including myself, do this on our free time.  Over the past year, I bet I have maybe spent 100 hours doing my cop blocking, which does not include time spent blogging.  That time equals two and half weeks of work as a full-time employee.  There are 24 hours in a day, 168 hours in a week, and 8,763 hours in a year.

If you visit other Cop Block YouTube channels, you can look at the time on their videos and how many videos they have posted to get a rough idea how much time they spend doing what they do.  The real question though is, why do you care?  Why do you care what someone you don’t even know does with his time?  Is it violating you in some way?  Is it causing you physical harm or has it caused you a loss of property?

That’s the thing about this country:  you can do with your time what you want.  We could be spending our time going to bars and getting wasted, sitting at home getting fat playing video games, or even worse, become cops where the chance of harming someone grows exponentially.

What some of you see as a waste of time and silly, we find value in.  In all honesty, how do you respond when someone tries to dictate what you do with your own time just because they disagree with it?  My guess is many would respond with, “Mind your own fucking business,” or “What do you care what I do?”

I do what I do because I hate corruption in the system that all of us are forced to pay taxes into to support.  The government as a whole is the real welfare whore, if you want to really point fingers.  I love my country, but hate what it has become due to the out-of-control actions of our government from the local to federal level.  I believe that all of us have inalienable rights that are supposed to be protected by our U.S. Constitution.  I took an oath when I joined the military to support and defend the Constitution of the United States and I believe that oath did not end when I left the service.

We all have different paths that we follow.  Just because someone else’s is different from yours, it doesn’t make it any less valuable.  Find something that lights a fire in you, do it, and fuck those that don’t agree with your choices.  I know that I sleep well at night knowing that I live my life the way I choose with no regrets.