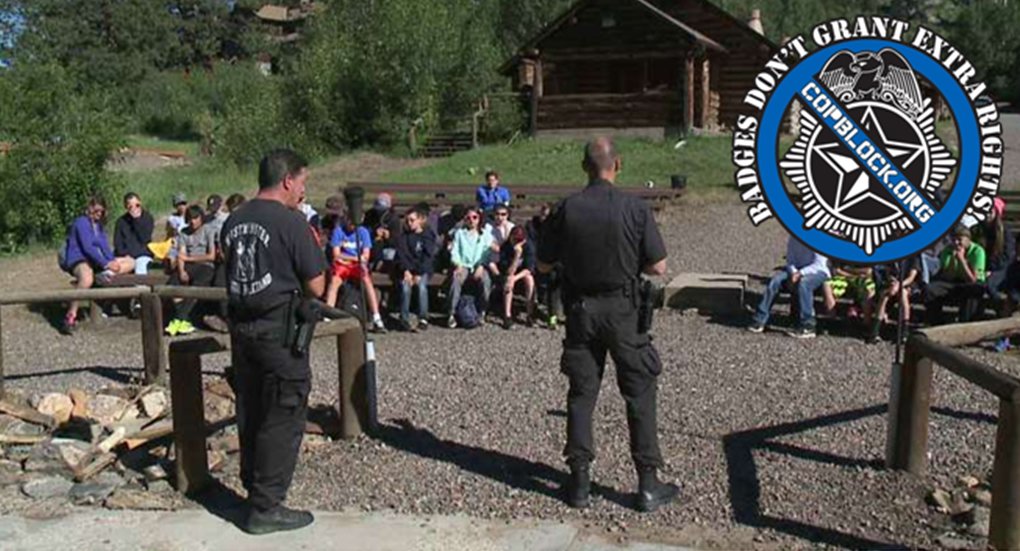 Its not a new idea, but in response to growing anti-police sentiment, more and more law enforcement agencies around the country are setting up what are being called “police camps” to indoctrinate children into the ideology of the police state.

Its not compulsory, but the implications for those who attend are just the same.

Sold as a fun loving way to observe what police officers do on the job, Commerce City Police Youth Services spokespeople say, “It’s important to us to engage with the youth in our community so they can see us as real people and not characters on TV or characters on the Internet.”

And the propaganda is already taking hold.

One camp goer asserted, “everybody thinks police officers are big bad guys, but when you start learning how they work, they’re really just trying to help people.”

Springfield Township Police Chief Gary Baldauf candidly admitted the camp, originally set up in 2010, is a means to secure allegiance to police from young people.

“We started [the camp] as a way to increase the interaction and build positive relationships between young people and police officers in our community,” Baldauf said. “My hope is that students see police officers as responsible adults and role models who are here to help the community and want to help them succeed and become better citizens.”

The children were taken out for pizza, visited a movie theater, and a skating rink, and on the final day, brought their parents for a get-together on Lake Conroe that included a cookout, fishing, and fun on an inflatable water-slide – all designed to cultivate a more positive perception of police.

“I see the kids have a more positive view of police officers – kids that have either negative experiences with officers because of their parents or just what they heard in the media,” Conroe ISD police Sgt. Julie Wright said. “Afterwards, it’s always, ‘[police are] a lot of fun; they’re just like my mom and dad,’ we see things like that. It’s really moving.”

To evaluate the impressible children’s perception of law enforcement, officers at the camp distribute surveys asking students what their thoughts and feelings are about police officers.

Before the four-day weekend the usual responses from 10- and 11-year-olds are “mean,” “scary,” and “tough,” police say, but after the camp however – wouldn’t you know it – the kids just love cops. Imagine that.

In Largo, Florida, children as young as six are participating in police camps.

In Pittsburgh, 60 children, ages 10 to 14, began a week long indoctrination retreat Monday where children are applauding the fancy gadgets like X-ray goggles and sirens utilized by officers.

This week in Virginia, a state wide effort deemed Virginia Rules Camp is underway at multiple locations including Sutherlin, Richmond, Chesapeake, Albemarle/Charlottesville and Norfolk. The camps are a partnership between the state attorney general’s office and local law enforcement agencies.

Virginia Attorney General Mark Herring visited Camp Selah in Sutherlin, Monday, to reinforce that, “because of the hard work of localities and law enforcement agencies, more kids than ever are now able to benefit from these critical lessons at Virginia Rules Camp and have a lot of fun, too.”

“It helps kids mature in the right way,” Herring added. “I look forward to doing more of these across the state.”

In Kentucky, the Richmond Police Department’s five-week summer youth camp began last week that includes activities like laser tag, and video and arcade games. More than 50 children are participating and the camp is partially funded by taxpayer money.

The state-wide Virginia effort is taxpayer funded as well. Pittsylvania County Sheriff Mike Taylor said the camp in Sutherlin is being paid for by money from the attorney general’s office and the county’s asset forfeiture program.

The rest of the police camps mentioned above, as far as I can tell, are payed for by fundraising and ticket sales. In the case of Conroe, Texas, the four day camp cost a total of $30,000.

Predictably, the camps have perturbed critics.

In a letter to the editor of the Evansville Courier and Press in Indiana addressing camps in the area ran by the Fraternal Order of Police, Justin Graham, of Newburgh said, “[Police camps] sound like another mechanism for indoctrination of young people.”

“The camp is run by police, so it gives a very one-sided view of what police do. People attending doubtless[ly] come away with the impression that the police are all heroes – the “good guys” – who protect and serve us and keep us safe from the “bad guys,” Newburgh said.

“If the attendees were taught about the epidemic of police brutality, police assaults and even murders of unarmed suspects and the impunity with which police routinely get away with these crimes, the abuse of civil asset forfeiture to pad the accounts of police departments across the country, and the over-policing of poor and minority neighborhoods leading to police harassment, the students may have come away with a very different impression of the police.”