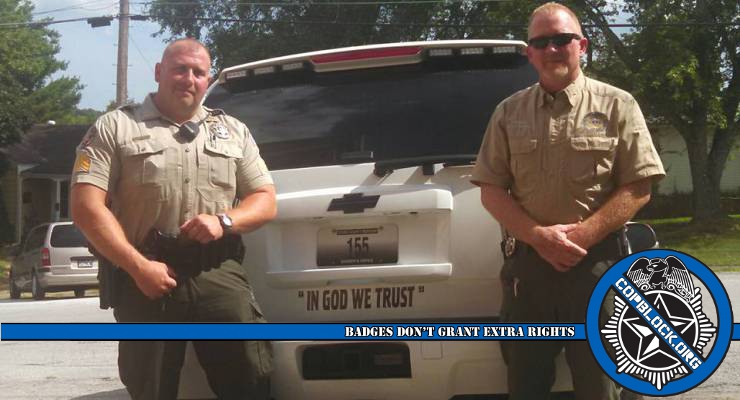 It’s not unlike the homeland foot soldiers of the empire to turn on the people they are to serve and protect to become a twisted, abusive, underhanded gang of thugs dealing in crime and violence to benefit themselves at the expense of their fellow citizens; so often throughout history their favorite way to do so is under the banner of a god. And so we add to that list Stone County, MO Sheriff’s department with their brand new, donated (so don’t fret taxpayer) stickers with their new motto, “In God We Trust”.

I’ll be honest, I’m not a follower of any faith and this bothers the hell out of me. I long ago gave up any pretense of being better than someone who needed the “crutch” of religion and have worked to find other areas of import in life to engage with others. I don’t have religious debates with people if I can at all avoid it and I wont here. But there are some legal, logical and some might even say moral arguments against this that should be at least mentioned if not already considered and dismissed by those involved.

Around these parts we’re known for saying that “Badges Don’t Grant Extra Rights”, well I’d like to add that your favorite Deity doesn’t grant extra rights either. At least that seems to be why our nations founders thought any sort of peoples granted authority: government, their police, their military, should not officially recognize or to foist upon others, a set of personal beliefs through their public dealings, and they expressed as much in the idea of separation of church and state.

Anyone who is honest with themselves and history can see the basic reasoning in this because of the simple conflict of interest involved. Just the fact that not all people subscribe to the same religion should be enough to suggest that a neutral third party voluntary authority system, the best any of us could hope for in the police, is not possible when that authority subscribes to a higher authority than the people in general, and doubly so above the godless their religion pities and the infidels they despise.

Of course police power in America is already questionably moral. I would suggest that it is hardly ever legal and almost never moral in fact. So much of policing and authority is directed to revenue generation and behavioral modification for the purpose of enriching The State, and those who submit to its presumed authority, than it is to protecting private persons and their property. And so the question of any moral authority derived from throwing a god in the mix, one who some find offensive and others find entirely absent is laughable at best, dangerous at worst.

It seems to me illogical and frankly stupid to alienate some significant portion of the population by associating private beliefs with public service and stamping those beliefs all over public property that is used to serve that population. But I know why it’s done. It’s a power trip. It’s to say we’re better and more important than the rest of you. It says they believe their just power is derived from the authority of a god and not the people. Where have we heard that argument before?

It’s been bad enough having these gang members believe their authority was derived from their political and corporate masters, but now we’re literally talking policing for God! Even if you believe in a god, you still have to hope they believe in the same God, and furthermore that they subscribe to the best notions of your religion because not only does that deity not grant special rights but neither too has a particular religion been granted a monopoly on morality.

Simply put, just because you subscribe to a religion, the religion of state and or a god, does not by default make you a good person, a better person. It’s your character and your actions which do that.

“This will look great when it shows in a video of a suspect handcuffed and beat behind the car though” says Melvin Bryant in the social media response to the Stone County Sheriff’s announcement.

Check out the Stone County Sheriffs Facebook page for an enlightening debate of the peoples feelings about their actions and there is more on the historical, religious, legal, and moral aspects in the latest rant from blogger Horus Gilgamesh where I first heard of this, this morning.