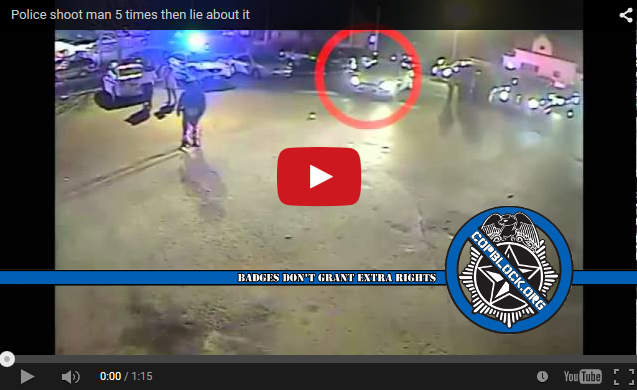 Attorneys for Jovan Webb have filed suit in federal court against the City of Waterloo, Iowa and several of its police officers. The lawsuit stems from a shooting that occurred on April 5th of this year.

In the official press release by the police, they claim that Webb drove towards one of the officers, hitting him with the car, which is why they had to shoot him.

On Sunday, April 5th, 2015, at 1:27 a.m., officers of the Waterloo Police Department responded to a report of a fight involving approximately forty people in the parking lot of the New World Lounge 2, 504 Riehl Street.

While attempting to break up the disturbance, officers attempted to stop a suspect, later identified as Javon Darnell Webb, age 27, of Waterloo. Webb got into a vehicle and attempted to leave the parking lot.  As he was fleeing the lot he drove towards an officer, striking the officer with the vehicle; this action resulted in shots being fired at the vehicle.

It’s the same old “I was in fear for my life” story that we’ve all heard too often. This time, however, it was all caught on tape and that tape proves the officers involved are lying. In the video, you can clearly see Webb driving through a parking lot with at least one officer running behind him, firing shots into the vehicle.

Webb was standing outside of a bar where a fight had broken out. Police were called to the scene to investigate. By the time police arrived, the fight was over and those involved in the altercation had fled the scene. According to the lawsuit:

“Soon after getting into his car, a man wearing civilian clothes knocked on the driver’s side window of Mr. Webb’s car with a black object. On information and belief, the man who knocked on Mr. Webb’s car was a Waterloo police officer and he singled out Mr. Webb because of his race. Mr. Webb pulled out of his parking spot to get away from the man, who he did not know.

After being shot, Webb managed to drive himself to the hospital to seek emergency medical treatment. However, when he arrived at the hospital, Waterloo police officers handcuffed Webb, which prevented him from receiving treatment. It was only after medical personnel protested that the officers removed the handcuffs so doctors could begin lifesaving treatments.  Webb was shot a total of five times – once in his chest and twice each in his abdomen and arm. Though doctors were able to repair most of the damage, Webb still has two bullets in him that cannot be removed without causing further injury.

Waterloo Police Officers Thomas Frein and Mark Nissen have been named in the lawsuit, along with other ‘unnamed’ officers.