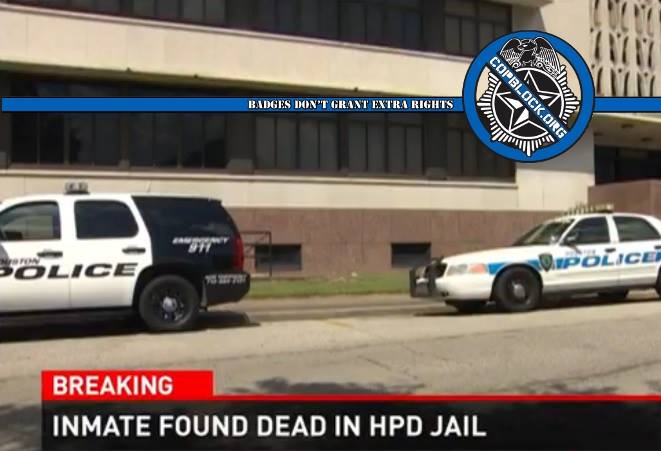 In what seems to be becoming an epidemic, yet another person has been found dead in a Texas jail, supposedly another suicide by hanging. If your bullshit alarm isn’t going off by now, you may wanna check and see if you are plugged in and functioning properly.

The most recent incident happened in the Houston 61 Riesner jail. A  38 year old Asian male was ‘found’ dead, allegedly hung by his own pants. He had been booked in the jail 12 hours earlier for possession of a substance and passed a mental health examination meant to screen for potentially suicidal individuals.

The still unidentified man’s body, it is claimed, was discovered by a fellow inmate. According to KTKR:

“He was let back into his cell, the cell door was locked behind him,” said HPD spokesperson Kese Smith. “Sometime after that, when his suite mate finished lunch, he went back to the cell and found the deceased individual dead. At this time it appears he used his clothing to hang himself.”

The recent rash of jail cell suicide by hangings has come into national focus recently after the death of Sandra Bland. Bland was also found dead of an apparent hanging suicide in the Waller County Jail after a Texas State Trooper pulled her over and escalated a stop for ‘failure to signal a turn’. The video of the arrest and mugshot have inspired conspiracy theories, while friends and family are certain her death was a murder by vengeful police. I happen to believe it was, as well. Her position as a civil rights activist and outspoken criticism of police misconduct and brutality likely led to her being killed by megalomaniacal cops.

In between the two tragic deaths in Texas, a woman in Alabama was also found hung in her cell, something that is a pretty uncommon occurrence, as several precautions are taken to prevent these things from happening. Kindra Darnell Chapman, 18, was found dead of asphyxiation an hour after being booked for cell phone theft by Homewood City Police.

Are all these recent jail deaths merely an anomalous spike, or are they a new side of the brutal police state just now coming to light? How can we believe that three people whose crimes were failure to use a turn signal, cell phone theft and possession of a substance would be so distraught by these minor crimes that they would kill themselves in their jail cell? Is this consistent with rational patterns of human behavior? Are you still listening to what officials and mainstream media tell you, or are you starting to have some questions of your own?

Ask them. More. Faster. Wake the fuck up.