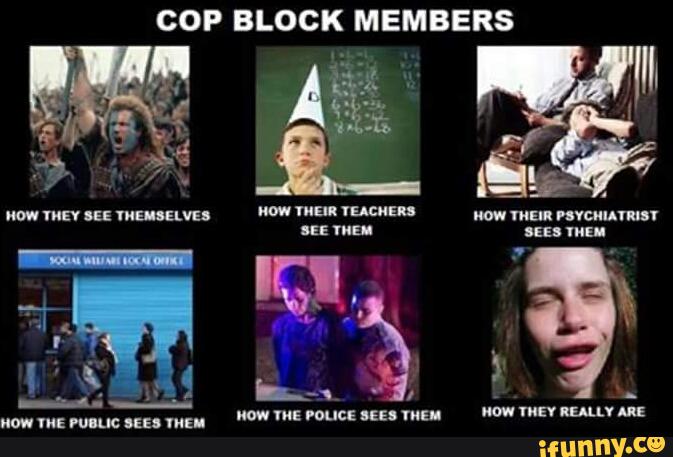 For many months I have been undercover here at CopBlock.org as a writer, editor and saboteur spy; unbeknownst to the people who really run the website- The Man.

While doing my best to fight the police state from within, I have also been gathering information about this organization and its true nature and purposes. What you are about to read is going to shock you.

Ever since a run-in with police back in 2010, Ademo Freeman, the front of CopBlock.org, has been working closely with multiple local, state and federal police agencies, as well as multiple intelligence communities and a litany of government abbreviations, known and secret. The entire cover story of the intention of the CopBlock being to spread the message that ‘Badges Do Not Grant Extra Rights’ is a front for a group that actually has a far more sinister purpose.

Haven’t you ever wondered why the folks at CopBlock.org seem to get away with so much? Did you really think it was because their publicity protects them from law enforcement? Of course not.

Did you ever wonder why we get away with saying such inflammatory stuff and nobody shuts us down? Do you really believe that is because the American government respects our first amendment rights? HA!

The reason that CopBlock gets away with so much both in real life and on its website and social media outlets is that it is fulfilling the grand purpose of The Man. It is creating a message that will lead to uprisings, which will allow a full-on police state, under martial law, to be enacted. This country is about to become one giant internment camp, and CopBlock.org are at the box office selling tickets.

You have probably heard about things like Jade Helm, The New World Order, The Illuminati, Reptilian Shapeshifters, Alien Visitors and a number of other “conspiracy theories”. Those are nothing compared to the real truth. The real truth is so unbelievable that enough people will never believe it in time to stop what is coming.

I cannot say anything more about that. I will be lucky if I wake up tomorrow as it is. These CopBlockers do not fuck around. Ever notice how every once in awhile one of your favorite writers or contributors just disappears? You think they just went back to working at Walgreens and playing MMORPG’s? Think again. There is a trail of bodies behind this website longer than the NYPD, LAPD and Clintons combined. Do a little research, the results will shock you.

I first found out the truth about CopBlock.or from a reader on their Facebook Page. I went looking through those posts by readers that nobody notices on the side of the page when I spotted some interesting claims. I messaged the person making them and was soon embroiled in a tale of serious allegations. After spending months investigating these claims, I was certain that they were credible. At that point I contacted the site and tried to get a gig writing, where I could work my way further in.

For the last several months I have been building trust and gathering information. I have convinced the people run the website, and the people who run them, that I was on their side. I have therefore been hard at work writing stories meant to incite hatred of police as a way of creating justification for a totalitarian approach to life in America.

But I can no longer do it. I can no longer sit idly by and watch what is happening. As my perhaps final act, I am going to release this article and post it all over CopBlocks social media, right under their nose, to expose them as the agent provocateurs they really are.

This post will likely be removed, but hopefully not before many of you can see it. However, I have also posted the same information plus loads of evidence to back up my claims, which you can find RIGHT HERE.

Pray for myself and my family, this may be the last you hear of me.