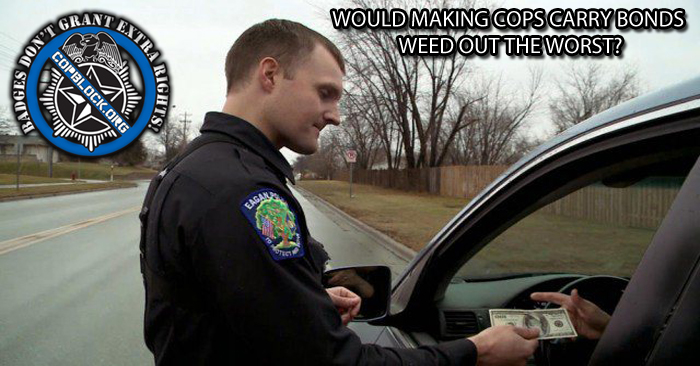 The article below was submitted to us at the CopBlock.org Submissions Page.
It’s content, advice and ideas are those of the author, who chose to remain anonymous, and not necessarily CopBlock.org

I have been thinking that a good way for LEO’s to maintain integrity in citizen encounters is to require that all officer’s are licensed and bonded.

A LEO Bond would be a financial security against the use of excessive force. Maintaining a yearly review of the officer’s conduct compared to their department’s standards would place the LEO’s employment eligibility within his/her own hands. The measurement would also either commend or condemns the officer for their actions by lowering or increasing the cost of bonding according to their reviews.

If an officer has a history of abuse of power, violence or unbecoming behavior the bond would be used to pay for court compensation, medical bills and other expenses incurred by the claimant, rather than using tax dollars.

The LEO should be a contracted individually to their respective department or municipality and required to maintain a bond to seek or continue employment as a public servant who has interactions with it’s citizen employers.

All LEO’s would have to maintain up to date premiums on their own bond, which would be determined by the LEO’s previous history of interactions and the number of complaints files against the officer.

Individuals wishing to make a claim against the officers would need to provide proof, including (but not limited to) claimant recordings -audio & visual- and medical history related to the encounter. This would preclude full access to body and dash cameras to any claimant making a request for evidence in their case. If the evidence is withheld from the claimant it shall be considered an admission of guilt by the officer(s) named in the claim.

The LEO Bonding would place the actions of individual officers in their own hands, and by having an independent third party review allegations of force, might ensure that officers not complying with department standards would face such high premiums that they can no longer afford to be employed.