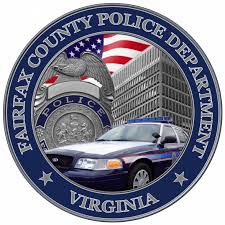 An Object Lesson in How Fairfax County Treats Its Veterans

This article has been updated several times since its original publication to include subsequent statements from the Fairfax County Police Department, a police union, and Alex Horton: 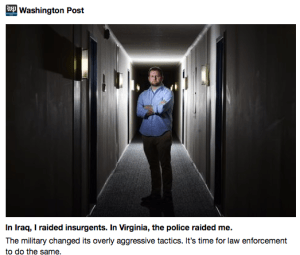 What has the Fairfax County Police Department learned in the aftermath of John Geer’s unjustified death? If you read Iraq vet Alex Horton’s article in the Washington Post yesterday, you know the answer is “absolutely nothing.” Of course, this would have also been obvious to anyone paying attention over the past 2 years, but Horton’s experience provides striking evidence that the FCPD is still carelessly aiming weapons on unarmed residents, and sees no issue with doing it.

We learned from the Police Executive Research Forum (PERF) review of the FCPD’s use of force policy and practices that the first thing new recruits go through at the police academy is firearms training. They apparently don’t bother going over the basic firearm safety rules that you see posted at every civilian gun range: 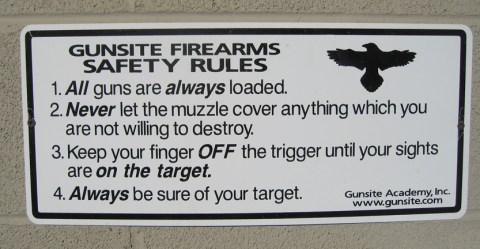 Here are the facts of the case: Alex Horton was staying in a model unit at his apartment complex because management was repairing a leak in his apartment. When he returned home one night, he accidentally left his door ajar, leading a neighbor to believe a squatter might be in the apartment. The resident then called the police. Horton recounts what happened next:

I didn’t wake up until three police officers barged into my apartment, barking their presence at my door. They sped down the hallway to my bedroom, their service pistols drawn and leveled at me.

It was just past 9 a.m., and I was still under the covers. The only visible target was my head…

…My situation was terrifying. Lying facedown in bed, I knew that any move I made could be viewed as a threat. Instinct told me to get up and protect myself. Training told me that if I did, these officers would shoot me dead.

Horton’s military experience gave him the presence of mind to hold still and calmly respond to orders. Most people roused from sleep by intruders in their home would have bolted from their beds in a panic, and they would be either dead or in the hospital right now, with the county taxpayers subsidizing another multi-million dollar settlement.

Horton went to the police department to complain that the officers improperly trained their guns on him, and didn’t bother to check with the management office before entering, which could have prevented the raid from happening in the first place. He also pointed out that the responding officers made false statements in the report. These complaints fell on deaf ears:

I met the shift commander, Lt. Erik Rhoads. I asked why his officers hadn’t contacted management before they raided the apartment. Why did they classify the incident as a forced entry, when the information they had suggested something innocuous? Why not evaluate the situation before escalating it?

Rhoads defended the procedure, calling the officers’ actions “on point.” It’s not standard to conduct investigations beforehand because that delays the apprehension of suspects, he told me. 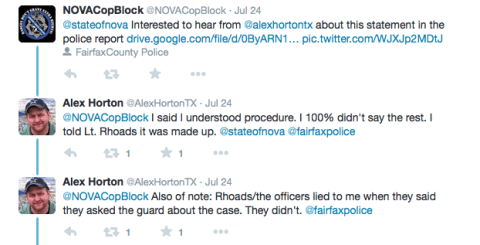 Less than 24 hours after Horton’s article appeared, Fairfax County Police Department Chief Ed Roessler issued a statement announcing that he had ordered internal affairs to investigate the incident. Why was there no investigation opened when Hunter raised his concerns at the police station? Why was there no investigation started when FCPD leadership saw the Al Jazeera America report based on Horton’s tweets the day of the incident? We know from the documents released in the John Geer case that FCPD searches and collects news articles about the department.

We also know that FCPD was previously aware that Horton was upset about the raid on his apartment and tweeting about it because of their dismissive responses to his concerns. 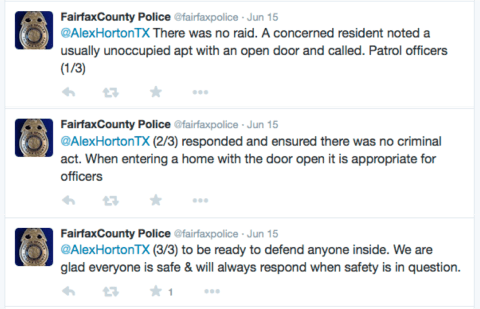 So why are they only investigating it now? Because the only thing Fairfax County‘s police department and elected officials respond to is public shaming. We have seen that they certainly aren’t responsive to citizens’ complaints otherwise.

In May, retired Navy pilot Phil Boughton testified about a 2014 encounter he had with inappropriately aggressive FCPD officers who raided his home, pointed guns at him, and even threatened to kill his dog if it so much as barked at him. He sent a letter to Chief Roessler and even went to police headquarters to officially lodge a complaint, but never received a response.

This pattern of FCPD using abusive tactics and then refusing to investigate citizens’ complaints was highlighted in stories presented by several other residents at that May meeting as well. There was the woman who was assaulted in a domestic violence incident, only to have an FCPD officer show up, arrest her, and then falsify the police report; the mother who was intimidated and roughed up when her young son called 911 over having his Internet privileges taken away; and the man who detailed his unsuccessful experiences trying to get police abuses investigated, beginning with a 1993 incident where officers trespassed on his property and then lied in court about it.

We have far too many documented instances of the Fairfax County Police Department’s unnecessary, unaccountable, and often lethal aggression to continue to dismiss them as “isolated incidents.” Northern Virginia Cop Block intends to keep up public pressure on the department and elected officials in the county until meaningful changes are implemented.

Join us at our August 4th protest.

This article is the first in the Why We Protest series. Stay tuned for other articles throughout the week.

I attended the Fairfax Ad Hoc Commission’s Use of Force Subcommittee meeting several days after writing this article. FCPD Deputy Chief Tom Ryan and Major Mike Klein from the Internal Affairs Bureau attended the meeting to respond to the committee’s questions about the incident. Their response was basically to say Alex Horton didn’t hear the cops knocking on his door because he drank too much, couldn’t tell the difference between someone merely having their gun out versus having it pointed directly at him, and “oh, watch this video of some other incident in another state that shows why cops always have to be ready to shoot people.”

Here’s the video from the meeting, which has been watched over 500 times because apparently the most entertaining thing on our YouTube channel is a grainy recording of FCPD officials making asshats of themselves.

Not willing to let FCPD stand alone in embarrassment, the Fairfax Fraternal Order of Police Lodge 77 disgraced itself by posting a response to Alex Horton’s article that took strong exception to his characterization of his experience as a raid, and also to “the current climate of constant criticism, Monday morning quarterbacking, and mistrust of police” that “has escalated beyond reason.” For good measure, they also threw in some whining about what a thankless task it is to be a police officer.

We shared the FOP statement with Alex Horton on Twitter and he shared some brief remarks about it, seen below.

@NOVACopBlock I see @FairfaxFOP77, instead of thoughtfully engaging, spends a lot of time dissecting the word ‘raid’ and misses the point.

@NOVACopBlock Both @FairfaxFOP77 and @fairfaxpolice need to get out of the weeds and discuss how to make everyone safer, not just cops.

Yesterday, FCPD Chief Ed Roessler released his final statement on the investigation, along with the 911 recording of the call, which the department conveniently said they were not the custodian of and therefore could not provide when we requested the recording under FOIA. In a turn that will come as a surprise to no one, the result was that FCPD investigated itself and found that it did nothing wrong. I don’t think we’ve heard the last of this story.

After seeing Major Klein’s disparaging remarks in the video above, Alex Horton attended the August 12th meeting of the use of force subcommittee, and addressed the dismissive, victim-blaming, veteran-stereotyping responses he received from Fairfax County Police officials following the June raid on his apartment.

His tweets nearly a month later reveal that the department stands by the character assassination and refuses to conduct a proper investigation:

Context: @fairfaxpolice IA chief Mike Kline lied publicly about what I was doing the night before their mistake raid https://t.co/KgERfAZA9V

I asked Horton to consider attending the September 14th public comment session regarding Fairfax County if he felt his concerns had still not been adequately addressed. He had this to say in response.

@NOVACopBlock They aren’t, and I won’t. @fairfaxpolice has revealed a culture violently terrified of reform and lessons learned. — Alex Horton (@AlexHortonTX) September 13, 2015


Alex Horton wrote one final letter to Fairfax County Police Chief Ed Roessler in October after months of getting nowhere with his concerns:

Never heard back about Kline, not even a no from him. I suppose folks in your department are focused on a pumpkin patch hurting their feelings, which is certainly indicative of the priorities of your officers.

The drop in communications confirms a notion I developed since your first investigation: you do not take your job seriously, especially in community relations. There were several opportunities along the way to be frank, self-reflective and absorb teachable moments. But you have obfuscated procedure, backed up smearing language by noted stonewaller Kline, and accepted sloppy googling as an investigation technique. You protect people who protect themselves first and the community last.

Your officers could have shot or killed me with no witnesses, and since they (or Rhoads) made up the conversation at the gate, they would have made up the reason why.

Now that I’ve been through it with you and Kline, it’s not hard to imagine you two fumbling that theoretical investigation worse than you have ineptly handled the John Geer case. So when we step out of theoreticals and into the next real life moment – when your officers kill someone without cause (again), or violate civil liberties (again), it will be due in part by your refusal to extract any meaningful lessons from this case.

That is a big reason why I left Fairfax County as soon as I could, and why I tell every single resident I know about what happened – that the only time I felt unsafe in two years in Alexandria was when your officers raided me by mistake. Which makes your officers the second most dangerous people I’ve encountered after suicidal guerrilla fighters–and trained half as well.

I do not accept the apology you offered on our last call, when I asked you to step from behind the badge and speak man to man. You failed to deliver, failed in your responsibility to serve the community, and failed to display any dignity and common sense through this process.

Protecting your own over us: It’s the same philosophy that killed Mike Brown, Eric Garner and Tamir Rice, and ignited protests in Ferguson and Baltimore. And it’s the mindset of your officers that killed Salvatore Culosi and John Geer.

You set the tone for police culture. The Fairfax County officer who will kill the next citizen without cause is learning from apathetic and resentful cops like Rhoads and Kline right now. He’s learning from you. That is the idea that should drive you to be a better leader. But it’s the same thought that made me leave the county with the promise to never come back.
Alex Horton