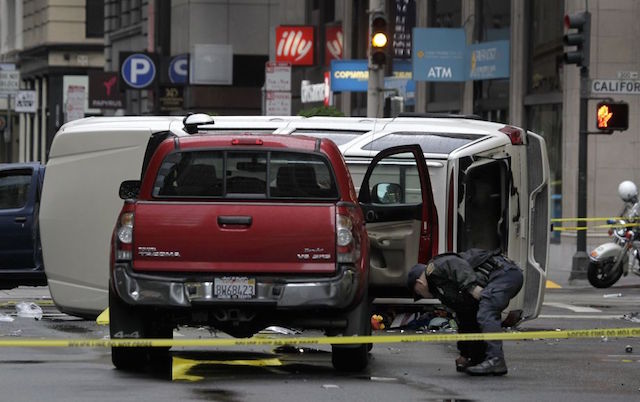 As the oft-repeated and increasingly evidence-refuted claim that police shooting victims ‘had a gun‘ or some other weapon is losing credibility with the public, police seem to be coming up with new justifications for use of excessive force. Earlier this year in Des Moines, Iowa police shot and killed Ryan Bolinger for ‘walking with a purpose’.

On Sunday – July 26, 2015 – the San Francisco Police Department shot and wounded a carjacking suspect because, “he turned on me.”

On Sunday morning an as-yet-unnamed man crashed a stolen car near the San Francisco International Airport. Officers responded to the scene of the crash almost immediately and the suspect ran off on foot before attempting to carjack an occupied vehicle by getting in the passenger side while it was stopped at a red light.

Police ordered the driver and the suspect out of the car and the suspect complied but then tried to run away from police. An officer on the scene ordered him to put his hands in the air, but the man failed to do so and then ‘turned on’ the officer, after which the cop opened fire on him.

The man was hit in the torso, but is expected to survive the gunshot wound.

The officer has not been named and no footage of the scene has yet been made available to the public, if any exists.

While I am firmly against both the theft and carjacking the criminal was involved in, I see no evidence that a potentially fatal response was necessary. What does ‘turned on’ even mean? Was the man turning around to face the officer? Was this the crime that got him shot? Did the cop notice an evil spirit from ancient Mesopotamia take possession of the suspect and realize that a demonic tragedy could only be prevented if he shot the host of the maligned presence?

Whatever it means, this much is clear- Police no longer need a valid reason to shoot us. No matter what they say, their actions will, in almost every case, be considered justified by the legal system they work within. As a cop you can kill with wanton abandon while citizens are arrested en masse every day for the thousands of victimless crimes that occupy our justice system. sfpd shoot unarmed man

My suggestion is that if you are involved with a cop- play dead. If that doesn’t work, and you are still considered a threat, you won’t have to pretend for long.