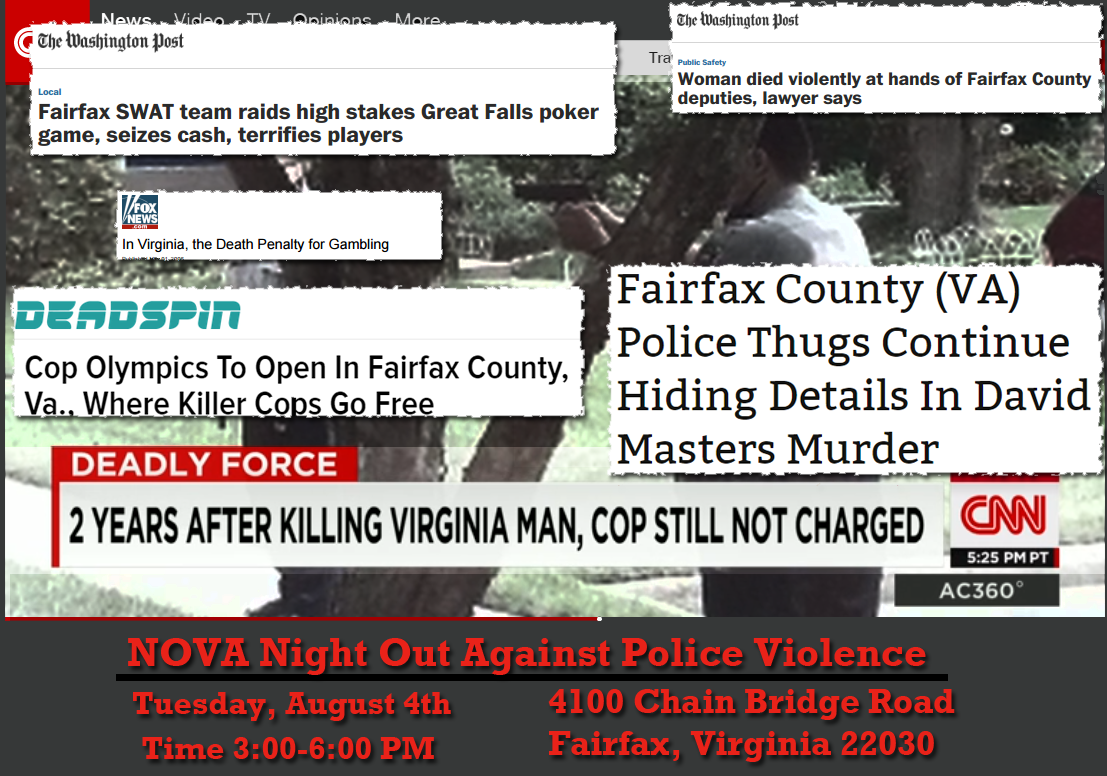 To remember the many victims of police violence in Fairfax County, and to continue to press for justice and accountability for these deaths, Northern Virginia Cop Block is holding a protest on Tuesday, August 4th in front of the judicial center that houses the police headquarters,  the sheriff’s office, county courthouse, and jail.  This date coincides with National Night Out, an event that the Fairfax County Police Department has been promoting relentlessly on social media, perhaps in the desperate effort to draw attention away from their many transgressions against residents. However, messages like the one below only serve to highlight their staggering hypocrisy in refusing to hold the killer cops in their own ranks accountable for their crimes against the community.

This lack of prosecution has not been for lack of opportunity.  FCPD officers kill about 3 people per year, and county residents have been left on the hook for millions in several of these cases. There is the record-breaking $2.95 million settlement recently paid in the John Geer case, a 46-year-old father of two who was shot and killed standing in his own doorway. There’s also the $2 million settlement paid to the family of Salvatore Culosi, a 37-year-old optometrist who was shot and killed when the SWAT team was inexplicably sent to serve an arrest warrant for betting on college football, an offense that only rose to the arrestable level after months of careful entrapment by an undercover detective (David Baucom) who befriended Culosi at a bar. Culosi was killed by another detective, Deval Bullock, who claimed he accidentally discharged his firearm when exiting his vehicle. Lawyers for the family say that claim is bullshit.The timing of this protest is significant for other reasons as well. In July, the Fairfax County Police Department celebrated the 75th anniversary of its founding. In August, the community will mark the 2nd anniversary of John Geer’s Death, and perhaps also an historic milestone —the first time a Fairfax County Police Officer is charged in the wrongful death of a citizen in the entire 75 years the department has existed.

In another disturbing case, David Ziants shot and killed David Masters in 2009 when he mistakenly thought the unarmed Masters reached for a weapon.  Or so he claims. The other officers on the scene reported that they didn’t see him reach for anything. In contrast to the other cases, no settlement was paid to Masters’ surviving family; however, Ziants was terminated for improper use of deadly force (he must not have belonged to the police union).

Immediately after Ziants fired, another officer can be heard saying, “What are you doing? Hold up! Whoa! Hold up! The —you doing dude? Come on.”

Apparently jealous of the FCPD’s unchallenged license to kill, the Fairfax County Sheriff’s Department joined the region’s coterie of killer cops with the horrific tasing death of Natasha McKenna, a 37-year-old mentally ill inmate at the county’s adult detention center. When McKenna refused to leave her cell in February, she was handcuffed, shackled at the waist and ankles, and a hooded device called a spit sock was placed over her head. Despite all of these restraints, the 6 sheriff’s deputies involved used a taser on her 4 separate times, a move Amnesty International describes as torture.

Minutes later, McKenna went into cardiac arrest and was transported to a local hospital. She died several days later when she was declared brain dead and removed from life support.  While the sheriff’s office was the culprit this time, they had many eager accomplices in the attempted cover up of this murder: Unjustified police killings are just one of the many reasons we’re protesting on August 4th.  I’ll elaborate more on the insidious culture of corruption at play within Fairfax County in future articles.

Join us for the protest, and invite your friends in the Northern Virginia vicinity!

This is the second post in the Why We Protest series.