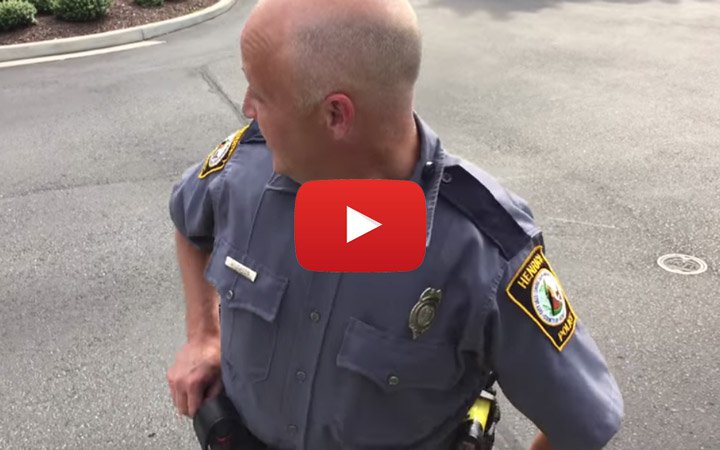 On July 13th I blogged about Kyle Hammond, who was arrested by Henrico Police officer Hughson for remaining silent. As I stated in that post:

Kyle Hammond was conducting a First Amendment audit of an FBI building in Henrico County, VA when Officer Hughson approached with a line of questions. Choosing to exercise his right to remain silent, Kyle decided to not say a single word. Now many people have said “You shouldn’t talk to police” and I know I’m one, but not many have actually put that to the test. Does it work? Do the police allow you remain silent and walk away?

Sadly, choosing to remain silent didn’t work for Kyle, who was detained and then issued a summons for obstruction of justice.18.2-460(A). Afterwards Kyle reached out to me and produced the video footage from one of the devices on his person that day. The video and story of Kyle’s arrest made the rounds on several other police accountability sites after being highlighted here first. With the help of CopBlock supporters and those of other outlets such as Photography Is Not A Crime and Truth Voice, the charges were dismissed just eight days later. Thanks, IMO, to the public pressure of those who took the time to voice their concerns about Kyle’s wrongful arrest (see my update post here).

Then this weekend I was contacted by a person who wished to remain anonymous. They stated that they had filed a Freedom of Information Act request (FOIA) with Henrico police and had obtained the body camera footage of Officer Hughson. I asked this person why the body camera video would be of interest, since Kyle had recorded the most egregious acts by Hughson himself. That’s when I was informed that the police had tampered with the footage.

In the video below I synced up Kyle’s footage with that of Officer Hughson so that you can get the full picture of the interaction. The FOIA request produced two video clips that I’ve merged into one clip, but other than the standard graphics I did no other editing to the video.

It’s unclear why the audio was dropped out of the video at 19:28 until 19:40, but clearly something was said that someone didn’t want us to hear. It should also be noted that at the end of the first clip Hughson is called to his supervisor’s car, where it seems the supervisor is on the phone with someone. Before the two Henrico police officers start their conversation, it appears that Hughson disables his body camera and it isn’t turned on again until he’s about to uncuff Kyle. See video below.

I reached out to Kyle to confirm the time frame of this video, and he said:

“After reviewing the video, I find it very disturbing that the Henrico Police is hiding the conversations between Sgt. Reamer and Officer Hughson through the use of redactions, and the removal/deletion of footage. I also am concerned that when they ran my ID it appears that I am on some kind of terrorist watchlist.”

That’s right, the other interesting aspect to this video is at 12:05 when Hughson is in this patrol car on some other device that’s not his police radio. You can tell this because the actual police radio is what keeps us from fully understanding what’s being said. Yet you can hear the speaker state that Kyle has a concealed carry permit and then something possibly about “terrorist”?

This story just becomes more and more bizarre. Not only did the officer have some sort of sensitive conversation in the guard shack, but he also disabled his own body cam and seems to have Kyle on some sort of watch list, too. This is yet another reason why body cameras are not the solution to curb police abuse. You cannot rely on them whatsoever. They will shut them off, delete footage, and/or tamper with it when you ask for a copy, proving that to create an actual objective record you need to do the filming yourself.