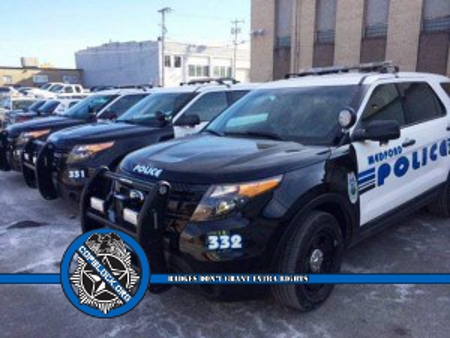 Driving home today, I got lost and made a wrong turn. In an unfamiliar area, I drove slowly but made the mistake of not seeing a poorly marked rotary. I stopped midway through it when I realized I screwed up and fortunately there were no close calls or potential accidents.

There was only a single oncoming car (not the Medford cop/detective in the video; he was on the other side) that had fully stopped before the rotary, having seen my stupid mistake. After I stopped and realized it was too late, I just continued out of the way and back onto the correct road in front of me.

This man started tailgating me and put his high beams on in his red Chevy Silverado pickup truck. He then yelled how I’m an asshole and that he was going to hurt me, and, well, the rest is in the video.

The date is incorrect as my dashcam apparently was set wrong. I very rarely ever need to pull videos off of it over the period of time I’ve owned it and just didn’t notice the date mistake. The time, however, is right.

I also never gave my address to him; he found it by running my plates/license, so his saying I’m not registered is false. I have had that info updated since I moved.

Lebert: “I’ll put a hole right through your head.”

Lebert: “I’m a f—ing Medford detective. And you went through that f—ing rotary.”

Lebert: “Give me your license.” … “Don’t worry, there will be a cruiser here in two seconds.”

Me: “Okay, I just wanna let you know I also have a dash camera.”

(Lebert walks away from vehicle, then turns around and starts walking back toward it, shouting.)

Lebert: “So I’ll seize that. I’m gonna seize that camera when you almost hit that car head-on when you went through the rotary the wrong way.”

Lebert: “I’m seizing your camera. Thanks a lot.”

Later on during the video, another exchange:

Lebert: “I didn’t show you the gun. I showed you my badge and ID.”

Me: “All I see is you reaching through your pocket, and you’re coming at me aggressively. I’m gonna run. It’s scary.”

Lebert then orders the driver to shut his car off. He complies. At one point, Lebert accuses the driver of trying to flee the scene, which he denies.

There’s a break in the video, and then the driver appears to be speaking to other bystanders and asking them to stick around and support his story to other police officers who have showed up at the scene.

Me: “I thought that guy was gonna kill me. He was yelling at me. I was super scared.”

Then the driver has an exchange with a different officer who has arrived at the scene:

Cop: “That’s one of our detectives.”

Me: “Yeah, he told me that. But, I didn’t know that, and he was super aggressive at me. He was yelling. And he jumped out of his truck, and he yells that he’s gonna blow my brains out. And so I got scared and I threw it into reverse. I’m like, ‘What the hell is going on?’ Like I don’t know this guy. He’s got tattoos, he’s got wifebeaters. Where I’m from—I grew up in Lowell, Massachusetts—it’s a rough area. When someone says they got a gun, they usually got a gun. So I’m like, ‘Oh, my god. I’ve gotta get the hell outta here.’”

176
SHARES
FacebookTwitterGoogleRedditTumblr
DiggLinkedinStumbleuponMailPrint
You Can Support Cop Block by shoppping on Amazon using the banner below:
BANNERS ARE CLICKABLE