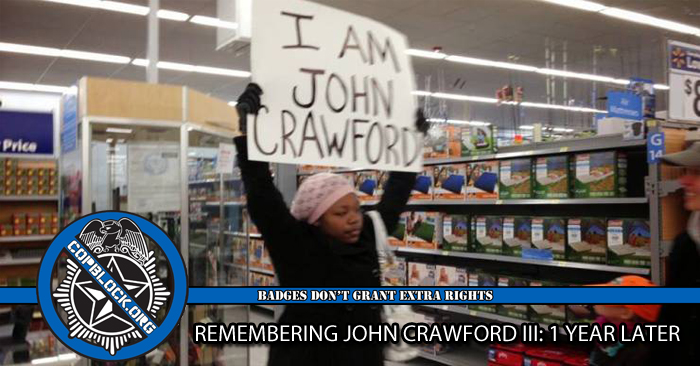 Many strange things have come to light surrounding this case in the time since he was gunned down. Walmart withheld the surveillance video at the request of the police department, which then covered up what happened and found Sean Williams justified in shooting Crawford. That makes Walmart complicit in the cover-up.

A few weeks into the investigation, protesters camped out in the Beaver Creek police station to demand answers from the chief of police. The chief resigned and then, a few weeks later, rescinded his resignation in a huge PR stunt for the mainstream media. Later we found out that Sean Williams’ daddy was a “higher-up” in the ranks of Beaver Creek police, thus influencing the decision to hire such a sociopath. We found that Sean Williams’ record is not clean, as he is responsible for the death of another suspect under mysterious circumstances.

Walmart furthered its involvement by issuing trespass orders that were vehemently enforced by Beaver Creek police during the protests that followed. In the past year there has been a protest at the Beaver Creek Walmart every month to honor the innocent man who died at the hands of an out-of-control police state.

In cities EVERYWHERE, protesters are kicking off the FIRST ANNUAL NATIONAL DAY OF PROTEST FOR JOHN CRAWFORD.

Every month, over the past year, we have met on the sidewalk by the street in front of the Beaver Creek Walmart where John Crawford was MURDERED by Officer Sean Williams. NOW, people all over the nation are coming together at their local Walmart locations for the FIRST NATIONAL DAY OF PROTEST FOR JOHN CRAWFORD!

Beaver Creek, Ohio will represent the location where John was killed by Officer Williams. But from the start there were over a DOZEN participating cities nationwide! Micah of Beaver Creek CopBlock has organized these protests all year, so good job to him for keeping up with it. RSVP for this event here.

Show up with signs and banners. Those who wish to march inside can do so, while others can remain on the sidewalk, by the street. There are SEVERAL groups organizing JOINT events at this location at this time. ALL are welcome!

Come out to Beaver Creek Walmart on the 5th of August to show you are tired of this police state and want the killings to stop. Hope to see you there and remember, “Badges Don’t Grant Extra Rights!”