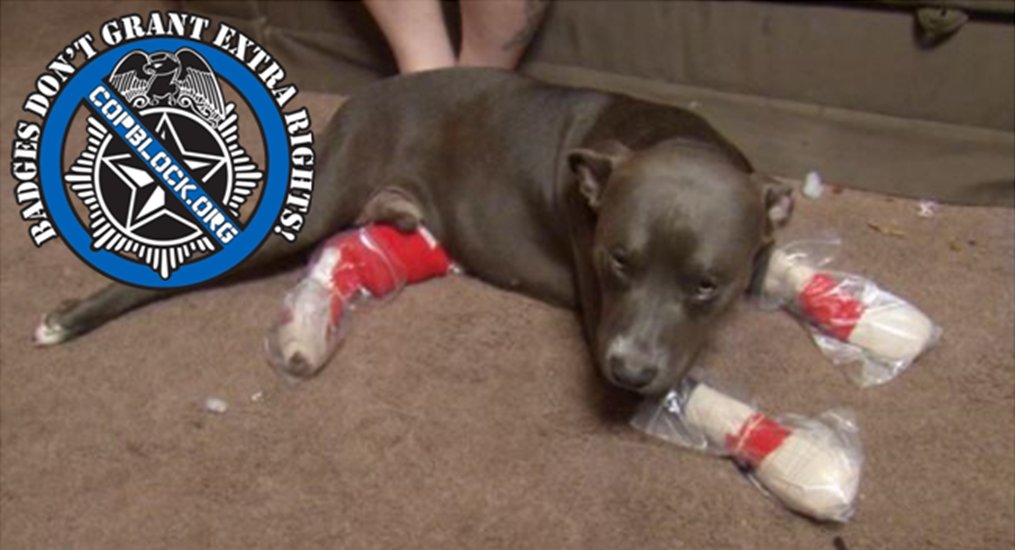 In recent years, the killing of canines by police has become a contentious issue resulting in the creation of the term “puppycide.”

Advocates of ending puppycide point to the blaring double standard that exists between police and the rest of the population.

While police dogs are more or less considered human beings in terms of the rights they posses when harmed by suspects, ordinary pets of private citizens killed or harmed by officers enjoy no such protections.

Animal rights activists and civil libertarians say the shootings are widespread and result from officers having little-to-no training on how to deal with animals.

But what if a dog it tied up? Spoiler! It doesn’t matter – And that’s what one Tampa, Florida woman found out last week.

According to police reports, multiple officers showed up at home of Brittany House during evening hours Friday regarding a child custody dispute.

The dog was said to be on a leash tied to a post in the front yard.

Tampa Police say the dog, Rambo, a one and a half year old pit bull, “aggressively lunged from the porch towards officers,” before one officer was “forced to fire two rounds” in self-defense.

Police reports maintain a neighbor gave a sworn statement vindicating the officers actions but House is not satisfied with that explanation – And neither is another neighbor who provided contradictory testimony.

“When we told [officers there] was a dog, that’s when [Rambo] came from under the house,” neighbor, Monte Bowens said. “When the dog came [out] from under the house both officers looked… [and] when they went back, the dog was just looking so he went with his first instinct: Bang-Bang.”

House says the dog (pictured above) was struck by both bullets and that on “both front paws, at least three toes have to be amputated,” and the animal has to have surgery or an additional amputation on one of its hind legs.

“I think it’s wrong, my dog wouldn’t hurt anybody, he’s so lovable and sweet,” House added. “I feel [police] do have a choice [and] they don’t have to be so quick to pull out a gun.”

Tampa police have not directly commented on the incident but say the city is attempting to work with House and has already paid $2000 in emergency veterinarian bills in addition to launching an internal review to investigate if the officer who opened fire was at fault.

Some analysts have claimed that a dog is shot by police in the U.S. every 98 minutes.