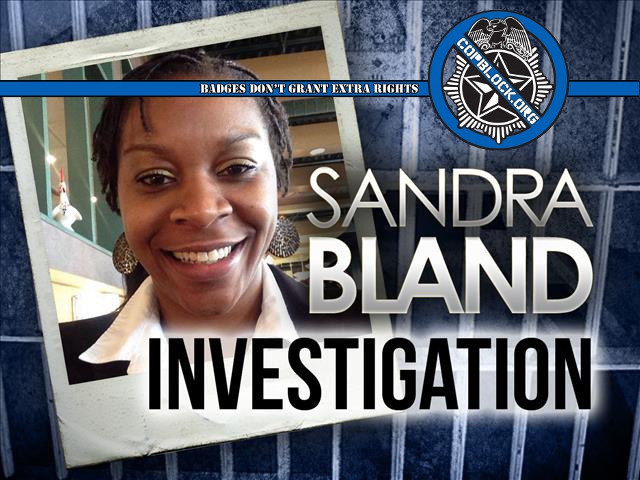 On Monday, Waller County District Attorney Elton Mathis held a press conference (see video below) to announce the appointment of a committee to review the suspicious circumstances behind the death of Sandra Bland. This committee will purportedly be comprised of “outside lawyers.” According to to Mathis’ press conference, this committee is expected to present its findings to a grand jury at some point during the month of August.

“There are many lingering questions regarding the death of Sandra Bland, and I’ve asked Mr. White and Mr. Jordan to assist me in asking those hard questions and making sure they are answered in a timely and appropriate manner as the evidence takes shape and is presented to my office,” he said.

Sandra Bland, of course, was a young woman who had a history of being outspoken about police brutality and racism by the police and who supposedly killed herself in jail after being arrested for a minor traffic offense. The fact that she was arrested at all, as well as the unnecessarily aggressive behavior of Trooper Brian Encinia during that arrest, have caused national controversy. In addition, the idea that she would kill herself over such a minor offense and after having expressed a desire to fight the charges within the days prior has been questioned.

On the face of it, an investigation by an outside group, rather than the typical “investigation” conducted by the co-workers of the cops that committed a questionable killing, would seem to be a step in the right direction. However, as has been pointed out on CopBlock.org previously, grand juries are typically used to cover up crimes by public officials, not to seek true justice.

When citizens go before grand juries, the overwhelmingly common result is for an indictment to follow. On the other hand, the complete opposite is true when police are the subject of grand juries. Indictments of cops are almost unheard of. A big part of that is because the evidence, witnesses, and questions asked are controlled by the district attorney’s office, which is often friendly with and dependent on the cooperation of police to win their cases.

Another complication is the fact that grand juries are a secretive process, where witnesses, jurors, and everyone else involved can be criminally prosecuted if they divulge what went on during the case. As a result, any improprieties are covered up by default. Essentially, prosecutors can intentionally “throw the game” by putting on evidence that supports the police version of events and avoiding questions that don’t and nobody even knows what went on. So contesting those actions is both illegal and close to impossible.

The idea that a jury saw the evidence and decided not to indict the cop is cited as proof that the police were in the right. However, the jury only sees the evidence and hears from the witnesses that the D.A. wants them to. It’s an old story with a predictable ending.

Another question that has to be asked is just how much of an “outsider” the lawyers on this committee will be. Police review boards, even those presented as independent “civilian” boards, have typically been stacked with police supporters and used as a ploy to legitimize police findings rather than genuinely investigate their actions.

Here in Las Vegas, the “Use of Force” board was on paper comprised of one half civilians and the other half police officers. However, the reality was that those civilians primarily consisted of ex-police officers from other states or the family members of police. Once criticism was raised about that, people with a connection to police were banned from being used as civilians on the board.

Not long after that, a majority of the civilians serving on the reformed board resigned after their recommendation to fire a cop who confused a hat with a gun and shot a man was disregarded. Thus was exposed the other reality of “independent” review boards. Police departments typically ensure that, even if they don’t follow the script, they have no real teeth with which to take a bite out of police crimes.

It’s still early in the game with this particular “outside committee” in Texas, but there are already some questions about whether these outsiders are really going to just be hand-picked ringers. Lewis White and Darrell Jordan, the lead attorneys on the committee, are both former prosecutors. That includes a year with the Waller County (where Sandra Bland was arrested) District Attorney’s Office for White and over eleven years as an assistant district attorney for Jordan.

Darrell Jordan also has a background of seeking political office, which isn’t necessarily incriminating, but often necessitates courting the support and endorsements of police departments and the unions that represent officers within those departments. If he has future aspirations for elected office he might not want to cross them. There’s also an interesting and maybe very telling skeleton in his closet.

Back in 2007, Jordan’s law firm was sued over a “pump and dump” investment scheme, where stocks for shell companies are artificially inflated and then sold abruptly, creating huge profits for those in on the scheme but rendering the vast majority of investors’ stocks worthless. During the run-up to the lawsuit going to trial (a settlement was eventually reached), one of the lawyers in Jordan’s firm was caught attempting to destroy evidence that was subject to discovery requirements, but that heavily incriminated their firm.

Jordan, who was the managing partner of the firm at the time, served as the executive committee liaison during an investigation into that incident. In spite of the documents in question being retrieved from a garbage can outside of Dallas and the existence of photos of them being dumped there, that executive committee failed to find any proof of wrongdoing. Later Jordan himself drew comparisons to Sgt. Schultz from “Hogan’s Heroes” for his claims of not knowing anything about the incident involving the documents being taken to the outskirts of the city and thrown in a secluded dumpster during a deposition for the case.

Forgive me if I’m a bit uninspired by the prospects of these “outsiders” conducting a proper investigation and doing anything except rubber-stamping the official story down there in Texas at the moment.

If you liked this article check out “Fear and Loathing in Las Vegas: the LVMPD’s Killer Reputation.”