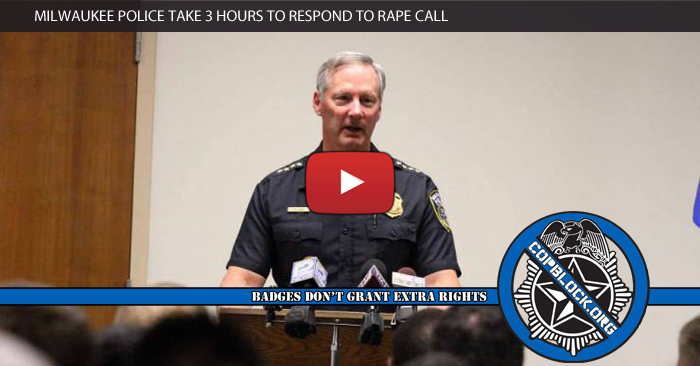 As if we needed another example of police not protecting the public, we have a story out of Milwaukee where police took three hours to respond to a rape call.

An 82-year-old woman who was raped by a stranger after she got off a bus last week was forced to wait three hours for a Milwaukee police squad car to respond, records show.

The woman, who has difficulty seeing, finally called the police dispatcher back and asked if she could take a shower.  The victim was told “do not do anything until a squad arrives,” because it could remove key evidence of the rape. Finally, three hours and six minutes after the assault was first reported, a squad car arrived, according to police records obtained by the Milwaukee Journal Sentinel.

The victim was getting off the bus and was knocked down and raped, but walked to her home and denied medical treatment because she didn’t think she could afford the ambulance bill. The rape was first listed to responders as a priority 1 call, but eventually made its way down to a priority 3 call (which allows police to respond to top priority 1 calls always before priority 2 or 3).

Six minutes is what it would have taken for officers to arrive, had they not downgraded the priority of the call.  Rape is a violent and traumatic experience for anyone to endure.  I’m sure the experience was made even more traumatic by the 3 hour wait that this woman had to experience before help arrived. A 29-year-old suspect with prior fourth degree sexual assault arrests has been arrested in connection with the case.  He is currently in jail and is believed to have been responsible for another sexual assault of an elderly woman back in the spring. The prosecuting attorney is currently reviewing the case to determine charges.

So many times I have heard those who do not like what Cop Block does say, “Why do you harass the police?  They’re here to protect us.”  There was no protecting going on here by the Milwaukee Police Department and it seems there was also no real concern for this elderly woman’s well-being, either.

Maybe these officers were too busy extorting money for victimless crimes such as speeding or someone smoking a little pot.  It seems to me that law enforcement is showing more and more that they are nothing more than a revenue generating machine rather than a so-called protective force.  The lack of service that this woman received from Milwaukee Police is inexcusable.  Sure, the police may have caught the rapist, but imagine how excruciating the three hour wait for help was for the victim.

This case has prompted a review of the department’s current policy on response times.  Milwaukee Police Chief Ed Flynn says that the current policy gives top priority to calls when a crime is still in progress or people are in danger.

The crime itself may have been over, but are we really to believe that three hours is acceptable?  The chief is going to review the policy?  There needs to be a lot more taking place than reviewing the policy.  I’m sure had the woman been the grandmother of one of those officers, the response time would have been only a few minutes.