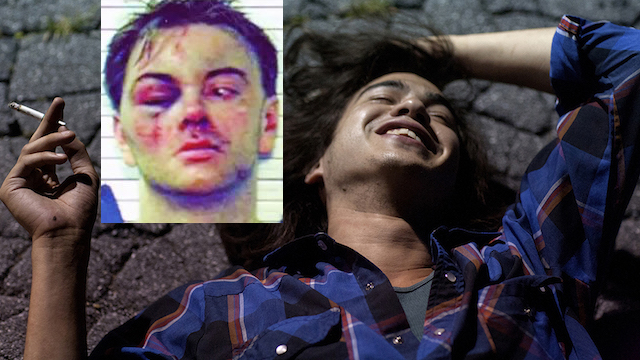 Back in May of this year Chris Siennick, 25, was out riding his skateboard, as he is wont to do. He admits that he has acquired both major biffage, as well as some undesired encounters with law enforcement. However, nothing that justified what was about to happen to him.

As he is riding down the side of the road, which is where objects with wheels are supposed to be traveling in the first place, a PSP cruiser slinks by and one of the troopers yells, “Get off the road faggot!’ In response Chris whips out the ‘fuck you’ finger and aims it in their general direction. He would soon wish he had not, even though nothing he had done was against the law.

Siennick said the troopers circled the block, parked on Locust Street, got out of the car and came after him as he was standing on Second Street.

“I didn’t want to get hurt, so I figured I’d run away,” Siennick said as he replayed the incident Tuesday afternoon from the exact spot where it happened.

Siennick says he was shot with a Taser but it didn’t latch on, hit with a baton, and tased again. He says his pants fell off and he fell in a clump, was dragged across the street, maced three times in the face and kicked in the head.

After being brutalized by this thuggish duo of ne’er-do-wells, Chris was charged with 14 crimes and spent three weeks in jail on a quarter million dollar bail. When the Dauphin County Attorney’s Office finally got around to looking at the video evidence against the man they had imprisoned for nearly a month, all of the charges were immediately dropped. The DA also recommended the state police investigate the troopers involved in the incident.

That investigation has already begun, and troopers Michael Trotta and Ryan Luckenbaugh have both been put on ‘restricted duty’ until the results are complete. That isn’t really as good as the full paid vacation that most cops get, but still a pretty sweet deal to get a lowered workload for same pay as a reward for beating the shit out of a guy.

In the video it is Luckenbaugh whose behavior is the most troubling, while Trotta is not seen on camera landing any blows. However Trotta was involved in a shooting a little over a year ago, for which he was cleared, with a homeowner who maintains the trooper was the aggressive party on his property. He was also formerly a security guard of a gated community who was once charged in a disturbing case of excessive force. But regardless of whether his hand in the brutality was as bad as Luckenbaugh’s, he did not assist the young man against his enraged partner.

The video has not yet been released to the public. Siennick is considering a lawsuit that will cost taxpayers. The investigation continues but will unlikely result in any real punishment for the troopers. The cops are probably getting paid to troll social media pages like our own. Everything is pretty much situation normal.