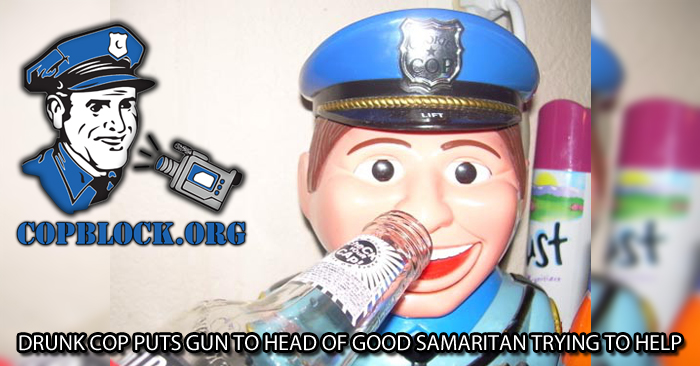 Last Saturday in Brooklyn Park, Maryland Michael Wojciechowski was returning home from the store with his girlfriend and their two small children when they saw their neighbor driving, seemingly in some sort of distress. Being a good neighbor, he got the man to pull over so he could make sure everything was okay.

The man, Fred Puryear, is a police officer. He became instantly irate at his neighbors goodwill, hopped out of this vehicle and aimed a gun at the family in the car who were concerned for his welfare. He continued to walk towards the car with his gun aimed and insisting the good samaritan put his hands where they could be seen, eventually putting it to the head of Wojciechowski, saying-

“Is this for real? I have my kids in the car. You are scaring them.”

Officers responding to Wojciechowski’s report of the incident found the offending officer in a state of intoxication, slurring and speaking poorly, as well as having bloodshot eyes and smelling strongly of alcohol.

Puryears wife says the officer has thirteen guns stashed around the house, one of which Anne Arundel County Police took into custody because it matched the description of the gun used in this incident. It is not clear if that weapon was personal or state-issued, yet.

A separate complaint about the officer had been called in just 40 minutes before this one. According to The Washington Times:

…police were called to the area after Mr. Puryear allegedly yelled at Raymond Lilly, 16, and accused the teenager of taking pictures of his property and vehicles, according to a second and separate Anne Arundel County Police Department report.

“The suspect told Mr. Lilly to leave the area,” the report states. “Before Mr. Lilly could leave, the suspect pushed Mr. Lilly twice on the upper body.”

The Maryland Department of Labor, Licensing and Regulation say they are investigating the incident, but will not release any further information, including the Puryear’s current status as an officer since the incident was a ‘personal matter’.

The drunken maniac cop faces fourteen charges, which include assault in the first degree, assault in the second degree, firearm use felony-violent crime and reckless endangerment.

The stereotypical hyperbolistically machismo and ultra violent cop thing keeps popping up over and over again. That the field of law enforcement is so inviting to, and employs so many of these psychotic oafs, is an indication of the problem with our entire policing system. A monopoly on force, as the police enjoy, is an open invitation to the worst kinds of people. And that which attracts such human waste must itself be, well…total sewage.