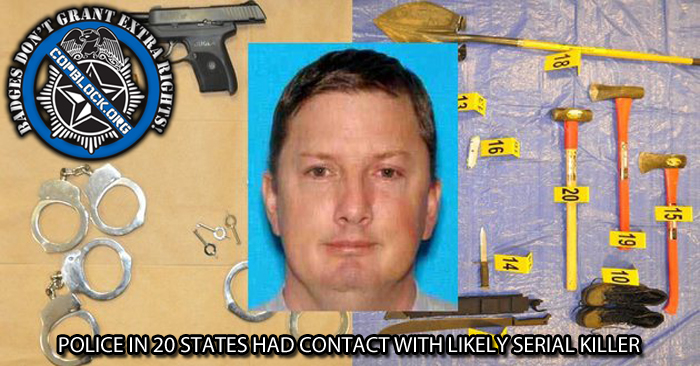 Even though police in as many as twenty states had encounters with suspected serial killer Neal Falls, it is possible that he has been on a decade long killing spree with potentially nine or more women, as well as a list of more to kill, mostly from the sex work industry. This raises a huge red flag in the ability of law enforcement to do what is most important- protect citizens from the most dangerous members of society.

[Charleston Police Lieutenant Steve] Cooper said Falls had “many contacts with law enforcement” across the country.

No history of major crimes in Falls’ record has surfaced. However, police said records show that authorities in states including Arizona, Kentucky and Virginia had interactions with Falls such as stopping him, running his license plate or checking his Social Security number.

Louisville police stopped Falls on July 11, 2006 and October 21, 2013. They did not know the nature of the stops but say most of Falls’ stops included something of a suspicious nature.

It is clear that there were several chances for police to have apprehended and stopped Falls during his serial killing spree. Why didn’t police perform their jobs and get one of the most dangerous men in the country off the streets when they had the chance?

The truth is that it is not unusual for serial killers to go uncaught. And since many of them, like Falls, like to taunt police by interacting with them, it is likely that most serial killers have actually been standing face to face with a cop who was unable to recognize one of the most vile sorts of criminals. Estimates of how many serial killers are currently active range from 35-100 in any given year, with many unsolved cases of serial murder that will likely never be closed. It is also possible that there are as many as 1,000 serial killers, mostly inactive, roaming among us at any given time. However only about 220 of them have been identified since the phenomena became recognized in the 1880’s, so averaging only a handful or less a year, only a small fraction of these homicidal maniacs are ever discovered and stopped.

Again the question is, how are they getting away with it? When so many of these homicidal maniacs roam freely and interact with police, how are they not getting caught? Could it be that the police just don’t care about SK’s, or is it that they are completely inept at targeting and capturing them? And…WHY?

The answer to that is quite simply that cops are not trained, motivated or ordered to invest any real resources into these type of crimes, as well as many others. Instead they are trained in more profitable endeavors like enforcing vice laws and other victimless crimes that bring in billions of dollars to police departments around the country every year.

While officials across the country urge officers to ‘connect with their communities’ by becoming a constant presence in the lives of innocent people, extreme criminals lurk among us unnoticed, their crimes not part of the larger agenda of law enforcement.

Instead of having the best and brightest working to stop the most horrifying human trespasses, we have a militarized army of low IQ bullies terrorizing the populace with unjust laws.

We have become so distracted with asking why cops are killing so many people that we often forget all the killers that are allowed to operate under their noses while law enforcement resources are tied up in victimless crime and investigating their own misconduct.

So long as cops kill more people a year than serial killers, while both parties more often than not get away with their crimes, we should not be asking for more of the same policing paradigms, but an end to the police state. Let us instead use those resources to prevent, stop and solve actual crimes. We don’t need gangs of armed thugs wandering our communities to feel safe. We need results. And when the service being provided offers more problems than solutions, it is time to rethink that system entirely.