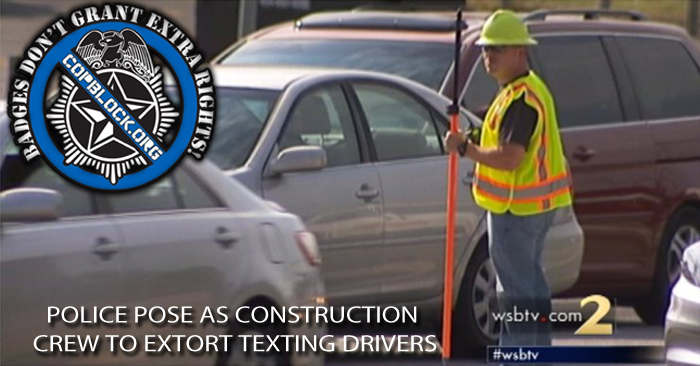 The tactics of the road pirates are shameless and know no bounds. There isn’t anything these revenue generators for the state won’t do to eat out the substance of their own countrymen.

Under the auspices of protecting a duped public from distracted drivers, Marietta Police in Cobb County, Georgia dressed up as a construction crew at a busy intersection at Cobb Parkway at Roswell Road, Wednesday, to catch people texting at stop lights.

The down-right sneaky effort not only held up traffic but included coordinated surveillance tactics that allowed officers to radio their findings to patrol cars waiting in the wings to pull over and extort motorists.

“What we’ve done here is we’re able to put officers in the roads so we’re able to get close enough almost inside their cars so we can look down and see exactly what they’re doing on their phones,” Marietta police officer Nick Serkedakis said proudly.

The Orwellian overtones of the statement were obviously lost on the highwayman but not on outraged drivers who received $150 fines and one point on their drivers licenses for the “code violations.”

Serkedakis responded by saying, “It doesn’t matter if you’re stopped at a light, if you’re on a public thoroughfare or public road and facing the phone, we’re going to have a conversation with you.”

Similar tactics have recently made headlines in the news.

Last week it was reported that four plain-clothed San Bernardino police officers in California, stood on highway off-ramps posing as transients holding up signs in attempt to catch drivers using their phones as well.

One detective, part of a team of uniformed motorcycle officers waiting nearby for a signal from the plain-clothed officers, boasted she made 13-14 stops alone, and said the team was able to stop 53 cars and issue 50 citations during the three-hour operation.

Thirty-three tickets were given to drivers for cell phone use and 15 tickets were doled out for seat-belt violations. Additionally, five cars were impounded after officers discovered unlicensed drivers. – Not a bad haul for a three hour extortion scheme.

As cops pat themselves on the back for their clever tactics, they continue to piss on us and call it rain.