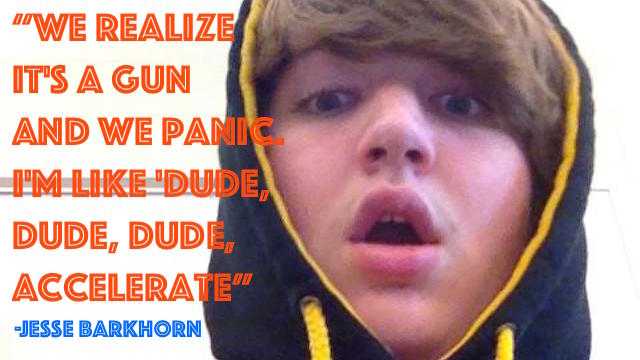 I would like to thank the police of this nation for remaining vigilant in their duty to upending the law. Your dedication to misconduct keeps me busy day and night honing my writing abilities and learning a plethora of new skills. I used to have this thing called ‘free time’ where I wandered aimlessly through this endless maze of existence with less goals than calendar space. Thanks to you my focus and dedication to meaningful activity now outweighs my existential malaise. And even though I am grateful for your motivation, could you maybe please stop shooting at people for no damn good reason whatsoever?

This past Sunday in Sparta, New Jersey, three teenage guys were heading home from a party at approximately 2am. One of them was being dropped of at another mutual friend’s house, but when the three mistakenly approached the home of a neighbor on the same block, their night took a turn for the terrifying.

A New Jersey State Trooper, who lived at the ‘wrong house’ heard the youngsters walking around his house and knocking on different doors ,came to his door brandishing a firearm. He claims that he exchanged words WITH the teens, while they say that he pretty much just screamed and cursed AT them through the door as they walked up the driveway. The young men then ran back to their car, frightened of the angry man, and the trooper soon followed with his weapon.

The trooper claims that he told the three that he was a police officer, however, they dispute that and say that if he did, it was after they were in the car and could no longer hear him. As they turned around in the cul-de-sac, the trooper aimed his weapon at their vehicle. Running high on that mixture of fear and excitement that teens experience regularly, the three decided to get the hell out of there as quickly as possible. At this point the officer fired his weapon at their car.

“We realize it’s a gun and we panic. I’m like ‘dude, dude, dude, accelerate,'” said Barkhorn.

Jesse Barkhorn- 18, John Baker-Marasco- 18 and Matthew Mayer-19, were all lucky enough not to be struck by the madman’s three bullets. The only shot that hit the car did so to one of the front tires.

They stopped the car, at which time Mayer fled, for reasons that were not immediately clear to his friends. The remaining two were held until other friendly servants of the people came to make their night worse. They were taken down to the station and repeatedly interrogated.

Mayer, who thought that the police helicopters he was seeing were perhaps looking for the crazed shooter, was eventually picked up by police and was joined with his two friends. From there the three were taken to the State Police Barracks in Netcong.

They were repeatedly asked if they knew the man was a law enforcement officer and if they had intended to run over him in their car.

“That’s the exact opposite of what we were trying to do. We were just scared and trying to get out of there with our lives,” Barkhorn said.

After nine hours the three of them were released with no charges.

The Attorney General’s Office is having their Shooting Response Team investigate the incident, however their statements seem to indicate that they already believe the trooper to be guilty of no wrongdoing.

The trooper, whose name has not been released, is still on active duty and so far is facing no charges for the potentially deadly situation he meaninglessly created. His neighbors also want some answers.

Barkhorn spoke with a lawyer on Wednesday regarding the incident, but it will be awhile before it is determined if a lawsuit is a viable option for the teens.

“We’re really not sure what to do,” Jesse stated. “I’ve never been involved in anything like this.”

I often notice that our society has evolved towards an ugly situation in which victimization is glorified and, in some bizarre twist, often valued and/or desired. When LEO’s receive any indication that there is a possibility of victimhood, no matter how real or imagined, it seems their first response is always to- SHOOT SHOOT SHOOT. And it seems that their training and culture has conditioned them to find the delusory needle of their own perceived victimhood in the haystack of regular human behavior. This makes for an extremely dangerous situation in which the increase of officer involved shootings, on or off duty, will likely escalate until enough people wake up and demand better for their communities and fellow humans.

Don’t let your alarm clock be the sound of a cops gun being wrongfully fired at you or someone you love.