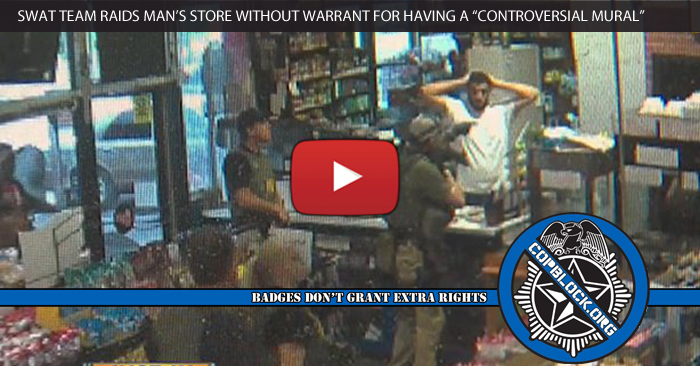 The FBI recently raided a small gas station in Cleveland, Ohio for apparently no other reason than having a controversial mural painted on the wall.

The SWAT team, armed with rifles, handguns, and bulletproof vests, stormed through the store without showing any warrants or answering any questions about why they were there according to the store’s owner, Abe Ayad.

According to Cleveland’s NewsNet5, Ayad demanded to see a warrant from the agents, but they were never able to show him one.

Ayad said that soon after the armed raid began, the SWAT team made their way to the back of his store and shut down his cameras, seemingly an effort to prevent the evidence of their warrantless armed raid from getting out to the public.

Because no crimes were ever committed, no charges were made as a result of the three-hour raid, but that didn’t stop police from confiscating $1,730 in cash from the store’s safe, along with two 9mm handguns and ammunition that the owner kept behind the counter for protection. “I guarantee you that they won’t charge me with anything,” Ayad said. The store owner told local reporters that this isn’t the first time he has been targeted by police in the form of a raid.

Ayad said that he believes he is being harassed by police because of his religious and political beliefs. Some have complained about some of the images on his mural which include priests, President Obama, and pictures of Jesus.

The city has told him to shrink the images on the mural that some people find controversial, but Ayad has so far refused to do so.

The FBI so far has declined to comment on why they chose to perform an armed raid despite no crimes being committed OR on why no warrant was ever presented. Welcome to Police State America.