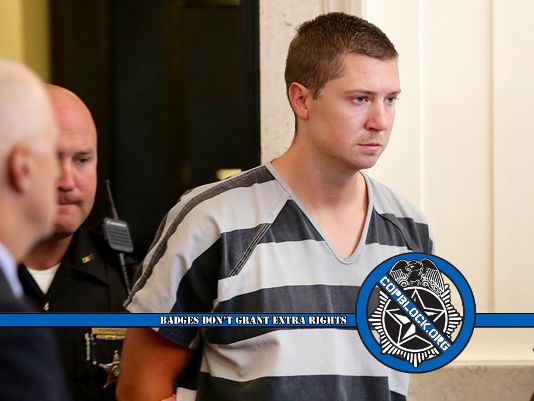 Ray Tensing pled not guilty today in a court appearance to murder charges in the fatal shooting of Sam Dubose during a traffic stop. Dubose had been stopped for not having a front license plate. (See below for the body cam videos.) Tensing has also been charged with the lesser crime of voluntary manslaughter.

According to ABC News: A University of Cincinnati police officer who fatally shot a motorist during a traffic stop pleaded not guilty Thursday to murder charges and was ordered jailed on $1 million bond.

People in the courtroom audience erupted into cheers and clapped when officer Ray Tensing’s bond was set at $1 million, drawing the ire of Judge Megan Shanahan.

“Ladies and gentlemen! This is a courtroom,” the judge said sharply.

Tensing is also charged with voluntary manslaughter in the July 19 shooting of Samuel DuBose of Cincinnati, who was stopped for not having a front license plate.

Defense attorney Stewart Mathews said there are two sides to the case and that the much-viewed body camera video of the traffic stop can be interpreted differently from the prosecutor’s version.

He described Tensing as “very depressed” and “in shock,” adding that the officer felt “like he’s been run over by a train from the start of this case.”

Tensing, 25, was fired soon after he was indicted. He had been with the University of Cincinnati for more than a year after starting police work in 2011 in a Cincinnati suburb. He has a UC degree in criminal justice.

The high bail amount, along the indictment itself is a rarity among cops who shoot people. All the attention focused on recent shootings, especially those of unarmed people and, in particular, minorities may have had some impact on that. Use of body cams by the University of Cincinnati police may have also played a big part in that. Obvious discrepancies between the body cam footage and the statements by other officers, as well as Tensing himself in the police report would have made it difficult for the police and district attorney to simply declare this murder justified.

According to the same article, the other officers, who made statements supporting Tensing’s account of the events, have been suspended during an internal investigation and the D.A. Joe Deters has called for the disbandment of the entire U of C campus police department:

Phillip Kidd and David Lindenschmidt are on leave while the university police department conducts an internal investigation, she said.

Body camera footage from the two officers was released Thursday. Kidd can be heard saying he saw Tensing being dragged. And in other footage, Lindenschmidt can be heard telling another officer that Tensing “went down, got tangled in the car and drew his gun and fired.”

In Lindenschmidt’s video, Tensing can be seen on the ground and then getting up. But there is no indication on the video of how of how he ended up on the ground.

Joe Deters, the prosecutor who brought the murder charge, told The Cincinnati Enquirer that both Kidd and Lindenschmidt testified before the grand jury that indicted Tensing.

Deters said the university should disband its department and turn over policing to the city.

It is, of course, paid leave – A.K.A. paid vacation. So some things don’t change, regardless. However, the tendency of police chiefs to automatically defend police officers accused of misconduct, even in deadly shootings, seems to be one of those things that is changing for the better:

“This officer was wrong,” Police Chief Jeffrey Blackwell said Wednesday, adding that officers “have to be held accountable” when they’re in the wrong.

UPDATE: He’s already managed to raise money for the $100k bond and has been released.

Previous Posts About the Sam Dubose Shooting on CopBlock.org