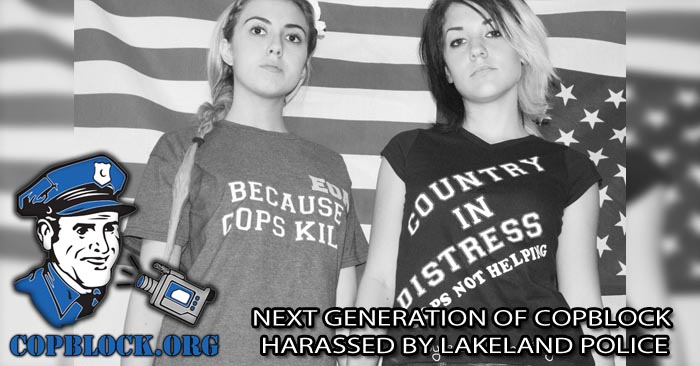 My niece and her friend (pictured below), who help me with Central Florida CopBlock’s and other YouTube channels when needed, were recently stopped by Lakeland Police. My niece and three of her friends were harassed by police while skating in a downtown Lakeland parking garage. I happened to be filming skaters three blocks away in another parking garage directly across the street from the Lakeland Police Station at the time they were stopped. When I got the call I was told my niece attempted to flex her rights and she was pulled away from the group and separated (which was obviously the case when I showed up).

There was evidence of a broken glass, but I wouldn’t even call that necessarily evidence of a crime. While I am not oblivious to the possibilities at this point in time, my niece was already in trouble for being out without permission (ehh.. not my choice) and I was a little irritated that the girls couldn’t get themselves out of the situation without calling me. They watch, edit and breathe police videos when they are around me.

I knew there was no reasonable suspicion that my niece was involved in a crime and I wanted to take her home. Considering her friend was supposed to be at our house, I decided to claim her, too, at the end.  Though I never claimed to be her guardian, the police released them both to me, but only after coercing their information from them with the threat of an arrest.

I decided to stick around for the sake of the boys, but they all seemed to be hand-shaking and in good spirits when they left minutes later, not realizing they would have been separated.  Even if they were all innocent, the usual police lie of “everyone is going to jail if someone doesn’t take responsibility” would have been used and someone would have made a false confession to save his friends. I was also a little upset they were not recording themselves.

Maybe they need to revisit the CopBlock.org “Film The Police Page.”