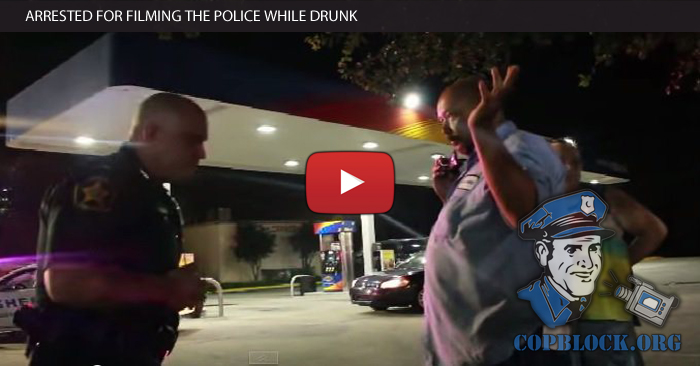 This video and story comes to us from Michael Burns of Cop Block Central Florida, via the Cop Block submit page.  This took place in Polk County, Florida. Michael relays to us what took place during the filming below: It is a long video but every bit as entertaining as an episode of cops over attempt to drunkenly hold police accountable…. Maybe the two don’t mix well.  Tommy is a longtime subscriber and apparently this type of interaction with police happens to him often whether the cameras are rolling or not. On July 29th, 2015 Tommy was told by a shop-worker that Grady Judd’s (The Sheriff of Polk County) nephew was being arrested outside.

Thinking of me, he grabbed is camera and went to record. Apparently he may have gotten too close, but it seems when he was asked to back up, he did.  At one point a sheriff’s deputy came over and became aggressive with him telling Tommy he could not record and according to the shop employee he grabbed Tommy’s arm as well.

Tommy called me to ask for the Polk County Non-emergency number and that is the number he dialed.  They were about to arrest him for that when they switched it to arresting him for obstruction of “justice.”

My Concern on this charge is how much was obstructed?  Was there an interview going on that was interrupted?  Was the officer unable to make his arrest because of Tommy?  This may all come to light if someone bonds him out of jail and he is able to get his phone back which contains the video in question. (Lets hope it is not deleted.) I will be returning to the shop to ask for their footage if they have it.

The deputy attempted to take my cameras but was quickly shut down.  I handed one camera off to Tommy to record audio when he got pulled away but he kept his finger over it almost the entire time.  Luckily it did its job and caught the full audio of the interaction.

I would highly recommend that if you are going to film the police, be smart when doing this.  Tommy did a fine job in documenting everything, but he placed himself in harm’s way by interacting with these officers.  I’m thankful that he was not beaten or shot during his interaction.  Had he been alone during this incident, you can rest assured that Tommy probably would have been brutalized in some way.

Did he make some mistakes in the video?  Sure, but we all make mistakes as humans and the best you can do is learn from them and use that knowledge in the future to protect yourself.  Michael did a great job in shooting back up video and he was able to keep the officers from escalating things with him.  They ended things on a cordial note and no one got beat down or killed.  Let’s hope we get to see the footage from the shop owner in the near future.