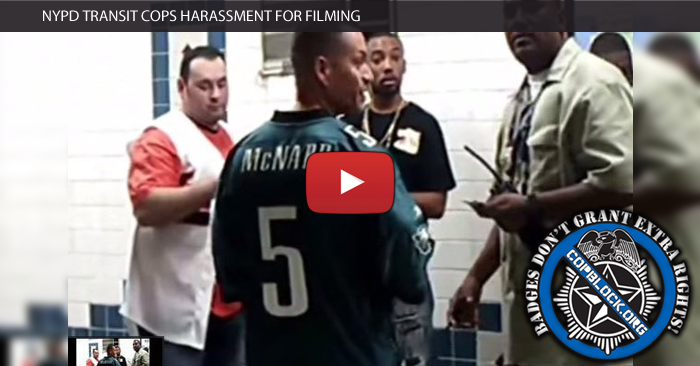 This video was recently uploaded to YouTube by Shawn Thomas.  You may remember him from a short, but to the point video we shared with you awhile back where he shut down a NYPD officer in under 7 seconds when he was asked what he had in his bag.  He did this in true New York form, to say the least.

Shawn is a photographer and was on his way to cover a “Night Life” event when he came upon these officers at the subway station located at  Flatbush Avenue / Brooklyn College.  He let the camera roll and the NYPD once again doesn’t disappoint in showing the world how they roll.

The video begins with Shawn videotaping a group of NYPD Transit officers that are huddled together talking.  One can only guess what these officers are conspiring in their little meeting.  The first officer to discover that they are being filmed is an officer wearing the white jersey.  He informs the other officers that they are being filmed before turning to the photographer and saying, “Sir, can you please stop filming us?”  Shawn of course stood his ground and ignored that request.

An officer in an Eagles jersey then approaches Shawn and holds a magazine in front of the lens to block the camera from filming.  He asks Shawn why he is filming and Shawn shuts him down by telling him that he doesn’t need a reason.  The officer knows that he’s been shut down and walks away.  An interesting side note that bears mentioning is the officer in the Eagles jersey is that he was the desk sergeant during the Officer Rojas incident shown in this video.  Note, the officer in the Eagles jersey in not in the video itself, I merely make reference to the video because the arrest that took place in this particular video is where Shawn had crossed paths with him before.  Nonetheless, the video is another example of the bullshit tactics that these officers use to stop people from filming.

Then the first officer decides to be a tough guy and approach Shawn and try his luck at intimidating him.  Shawn tells him that he has no choice but to be videotaped and the officer responds that Shawn has no choice because he can haul him down to the station right now.  This is the typical thuggery displayed by so many law enforcement officers that sounds all too familiar in so many of the videos we share with you.  The officer resorting to threats comes across as a child throwing a tantrum when he doesn’t get his way.

Shawn calls the officers bluff by daring him to haul him off.  You can see the surprise in the officer’s face as he’s probably not been challenged like that too many times.  The cop can’t accept the fact that he has no grounds to take him anywhere and continues to make a complete fool of himself for the camera for a few more seconds before walking away with his tail tucked between his legs after another officer who appears to be his supervisor motions for him to walk away.  That officer even holds his badge up for Shawn to kind of identify himself.  I’ll give that officer props for recognizing that his fellow officer was fighting a losing battle.

You really have to ask yourself why officers are so scared of a video camera being pointed at them.  I mean, if they’re doing nothing wrong, they should have nothing to fear.  That’s the same thinking they employ when someone refuses to answer questions.  With the growing number of these types of videos being uploaded for the world to see, you would have thought that more officers would realize that if they went about their business and left the photographer alone, there would be nothing for us to see.  This is the same reason we tell people to not answer questions.  Avoid giving your adversary ammunition and that’s what these officers continue to do on a regular basis.

The NYPD continues to piss and moan about their public image and play the victim.  For years this department has victimized the citizens of New York City with their violations of civil rights through the use of “Stop and Frisk”, violent confrontation through the use of unnecessary force, extortion, and murder.

To change someone’s perception of you, the first step is to understand the problem and address that problem.  These officers refuse to recognize that they have created their own problems in the public’s perception of them.  In 2001, the NYPD was hailed as heroes after the attack on the World Trade Center when many of their officers and firemen perished trying to rescue victims from the towers before they collapsed.  While I’m thankful for the sacrifices many of them made on that life changing day, one good deed only carries you for so long before the public turns on you for all of your misdeeds.

The video clearly demonstrates an attitude shared by many police officers across the country that they are some kind of kings to be bowed down to and worshiped.  For too long, people have allowed these officers to remain unchecked and accountable for their false sense of entitlement that they somehow think they have because they wear a badge and carry a gun.  Their inability and unwillingness to recognize their behavior as unacceptable clearly demonstrates that we as citizens have no choice but to spell it out for them by continuing to document their behavior and calling them out on it.

The two officers that engaged Shawn had no legal grounds to interfere with his filming.  They were clearly either ignorant of his First Amendment rights to record them in public while in the course of their duties or they just didn’t care about his rights.  I’m going to say that it’s probably a little bit of both.  They look at citizens as being below them when in reality, they are the ones below the citizens who are in actuality their employers.  How many other jobs do you know where you could get away with treating  your employer with such disregard?

It takes ordinary citizens standing their ground and flexing their rights, like Shawn did in this video, to help these officers in making a change.  By standing your ground and not letting them get away with bullying us, they are eventually going to have to realize that they would be better off to change their behavior or suffer the consequences of the court of public opinion.  One can only abuse a group of people for so long before that group turns on you and gives you a taste of your own medicine.

Hats off to Shawn for putting himself out there and continuing to fight the good fight.  He puts himself out there in harms way to make a difference in this police state we all live in today.  What we need is many more like him to join in the fight and take this country back from those that wish us harm.