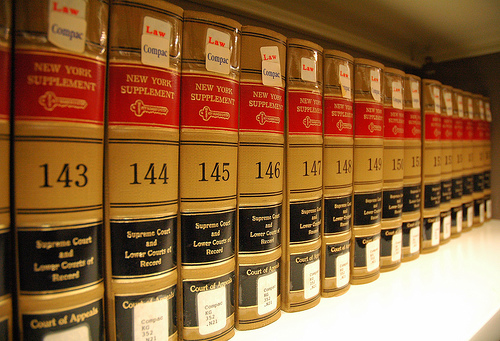 Published almost four years ago, The Myth of the ‘Rule of Law’ by Brainpolice is a damn solid write-up. That said, it’s almost certain that some readers may take issue with the article’s stated premise: there is NO ‘rule of law.’ But why?

Is Brainpolice wrong? Or might some readers unthinkingly default to a support-the-current-system stance based on their lifetime of pro-State rhetoric peddled in public schools, via the lamestream media, and from talking heads?

One point of clarification that’s more semantics than divergence is Brainpolice’s use of the word “law” – I’d use “legislation” to refer to anything man-made and “law” to refer to natural law, common law, or god’s law (take your pick, based on your preference). After all, those of us who point-out the bad actions of individuals wearing badges often are told “If you don’t agree with it change the law.” It’s not the law I seek to change (after all, I agree with the law, that I shouldn’t initiate force) but legislation. Why should you have a duty to pay attention to and abide by what some strangers write, especially as you’ve never signed or verbalized support of such dictates.

Of course we all want to live in peaceful, prosperous society where individual rights are safeguarded, but how is that best achieved? Through a top-down, centralized State, who’s agents create and interpret (allowing for double-standards) the rules or through an organic, bottom-up process? Children know it’s not right to steal, lie or hit, do we really need some strangers telling us how to behave?

The theory of a republic is essentially that, in contrast to democracy in which there is tyranny of the majority and in contrast to monarchy in which there is the rule of a single man or oligarchy, the law itself is what rules rather than men. In essence, a republic is supposed to be a model for government that avoids being both both democracy and monarchy, and allegedly replaces the administration of men over men with the administration of the law itself over men. In a republic, the law is supposed to restrain the lay public from creating tyranny of the majority (I.E. a democracy) and simultaneously restrain the institutional agents of the state from functioning as an elite of rulers imposing their will on the lay public (I.E. an oligarchy).

But a basic understanding of how human beings work and a rational analysis of how the state functions as an institution, including so-called republics, renders this theory of government as a rather blatant absurdity. How can a law be self-enforcing? By definition, a governmental law is drafted by men and must be enforced by men. No political system can escape the rule of men, for all political systems are created and run by men. At the same time, no political system is the result of the decisions of everyone within a society, for at a fundamental level all political systems are oligarchies in which a small percentage of the overall population are those with direct control over the state apparatus, those who actually make and enforce the laws.

The absurdity of the notion that a piece of paper with words on it in and of itself will fatalistically or pre-emptively stop human beings (including those within the state apparatus itself) from engaging in certain actions should be rather obvious. In terms of the lay public, they may theoretically engage in such actions anyways and their actions may be rather unpredictable. A piece of paper isn’t going to restrain a mob. And in terms of those within the state apparatus themselves, they have most leeway of all in the matter, for it is ultimately they who make the laws and may choose to enforce or not enforce them. Since they are not really bound by any higher external 3rd party institution, they may theoretically function in a lawless manner. The law maker is effectively and seemingly paradoxically “above the law”. For since they have a monopoly on law, they may theoretically interpret it and defy it as they please. The law is not binding on them. Rather, the law’s content and applicability is actually bound to their whims as the ones with power.

So it would seem that an attempt at a republic will always reduce to some kind of oligarchy, most likely a representative democracy with a constitution. The constitution is merely an additional feature of the democracy that is meant to restrain both the people and the government. Except a constitution cannot really be effective in any consistent or long-term sense. It will not fatalistically restrain institutional agents of the state from using power and the lay public from engaging in majoritarian or mob behavior. As the decades and centuries pass, it becomes less and less meaningful and effective as a society evolves (or devolves). At best, it functions as a lame rationale to provide legitimacy to the state while its alleged function as a restraint is rendered meaningless by the ability of the state’s institutional agents to exercise their power. A constitution does nothing to actually restrain or take away the opportunity or ability for institutional agents of the state to use power.

The notion of the rule of law would only make sense if the state was an entity external to human interaction, as if it were not made up of human beings but was enforced through some natural or supernatural mechanism. But the state is quite clearly created and administered by acting human beings. It is not some sort of intrinsic mechanism of nature that functions independently of human action, or the result of the will of some deity. The only laws that can be said to rule all on their own irrespective of men are natural laws. But natural law is not something that political systems are based on, as political systems are the synthetic creations of men. At best, natural law is an independent standard of justice that currently existing political systems may be held up to and discredited with. While some early natural law theories were used to legitimize states, a properly formed and applied natural law theory can only be used to delegitimize states.

There is good reason to be quite skeptical towards the effectiveness of governmentally created laws to begin with. Not only is it absurd to propose that laws can rule on on their own, but the ability of human beings to enforce them is quite limited due to a certain factor of unpredictability in the behavior of human beings. That is, the mere existence of a law illegalizing certain actions and even the existence of an institutional apparatus that attempts to have humans enforce such a law and threatens punishment for defying it does not guarantee that people will not in fact defy the law and that people will not in fact get away with defying the law. While this has obvious implications with respect to laws prohibiting economic interactions (which are miserable failures in light of their own alleged goals), it is even true with respect to laws against basics that everyone pretty much agrees are wrong like murder, rape and theft.

The notion that most people generally don’t murder, rape and steal either solely or primarily because there is a governmental law against them is rather absurd if one accepts the premise of free will (at least some kind of compatibalism). The existence of a governmental law in and of itself is not the cause of good or ethical behavior, and some people do engage in the shunned actions in question despite the existence of a law against it. If someone is truly determined to engage in such an action, they are going to do it regardless of whether or not there is a governmental law against it. Criminals are criminals precisely because they have an extremely high time preference, I.E. they want what they want now regardless of potential negative consequences that may come about in the future. If someone does not engage in such an action, it is mostly likely primarily because they themselves find it ethically impermissible. Social convention itself, combined with the natural incentives towards social cooperation, is the primary reason why most people tend to generally be peaceful in interpersonal relations.

In a fundamental sense, a society truly cannot be planned or socially engineered in the long-run, even by laws. A society is the sum total of interactions between the individuals that make it up, and such interpersonal relations are so complex and diverse that it would be impossible for a single individual or organization to truly predict and absolutely control their behavior. No human being or group of human beings has the mental capacity, let alone the physical ability, to deterministically control and pre-empt the behavior of everyone within a society. They would have to be omniscient to do so. The mere fact that one can only be at one place at one time renders any attempt to efficiently exercise such control ridiculous and pointless. So it could be said that all government is fortunately limited by definition, limited by the natural limits of human ability and the unpredictability and diversity of human behavior.

Quite clearly, the law is not something worthy of putting much of one’s faith in, even with good intentions.

For more:
The Myth of the ‘Rule of Law’ by John Hasnas [article]
Anarchy and the Law edited by Ed Stringham [book]
I’m Allowed to Rob You! by Larken Rose