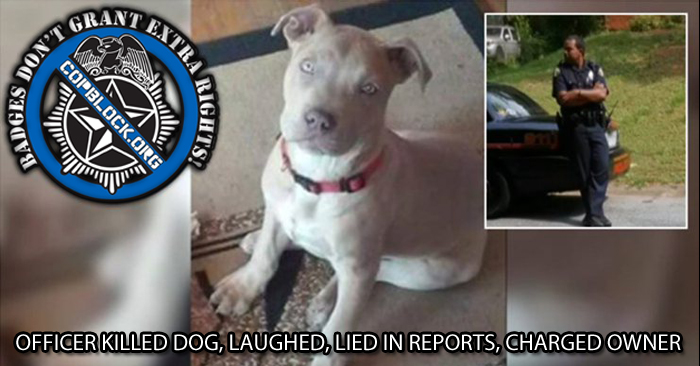 Witnesses in Clayton County, Georgia say an officer unnecessarily killed a canine, who posed no threat – in front of children – then laughed about it, lied in police reports, and charged the dogs owner for not having the animal on a leash.

Claudette Terry says she was moving into a new home on Pineglen Drive back in May when Clayton County officers spied a man sitting in her driveway – one of her friends – and began “investigating.”

“My son opened the door [and] the dog ran out and kind of stood by me where the other officers were,” Terry said. “He didn’t bark, growl or anything.”

The woman says she was speaking to two officers when a third, officer Walter Dennard, walked up and murdered the family’s 5-month-old lab-pit mix named “8-Ball.”

In police reports the officer claimed the animal “ran and lunged at him” but neighbors who witnessed the incident say that’s a complete lie.

“He just took a step back and he just shot at the dog,” witness Brandon Smarr said. “And then he started laughing afterward.”

Terry says she was first worried that her son had been shot because after she heard gunfire, she saw the boy drop to the ground and begin weeping.

Her worst fears where not confirmed however after she saw officer Dennard walk up to the canine and fire another round into its shaking body.

To make matters worse, afterward, the officer ticketed the woman with code violations for not having her dog on a leash and for not showing rabies paperwork.

Clayton County police say an internal investigation into the incident has been launched.

“He just shot the dog and stood there with no remorse, no regrets” neighbor Aijohli King said “[All] in front of her and her kids.”