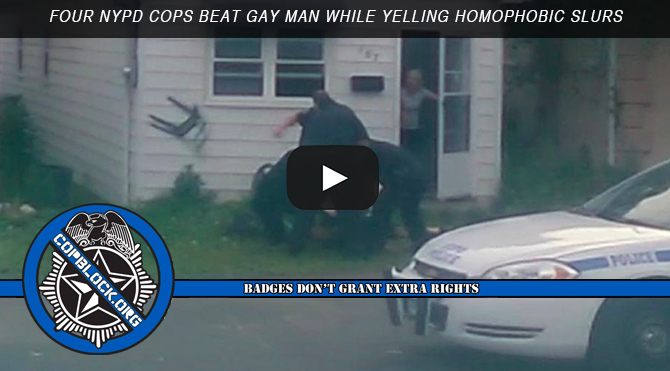 A Staten Island man is now suing the NYPD after being dragged out of his home by four officers who apparently beat him while yelling homophobic slurs. The incident happened to get captured on video by a neighbor who witnessed the brutal attack.

Responding to a simple noise complaint, the four officers arrived at Louis Falcone’s home after his mother had apparently made the call about his brother who had come home “obnoxiously drunk” in the early morning hours. By the time officers had arrived though, Louis Falcone’s brother had already left.

When police arrived to the front door of the home, Louis explained to them the situation through the screen door. The officers then demanded that he come outside.

“For what?” Louis asked them.

At that moment, according to Louis, his dog Looch had started barking from inside of the house and that is when officers began to act aggressively.

“Get your dog out of here or I”ll fucking kill it!” one officer shouted.

As Louis tried to shoo the dog back in, one of the officers yanked him outside and that is when the beating began.

“They threw me against the concrete in front of my house. My first reaction was to try to get up a little bit . . . While I was on the ground, I had mud and blood in my mouth. One of the cops said, ‘Don’t let it get on you, he probably has AIDS, the faggot.’” Having recently undergone surgery on his foot, Falcone was wearing a boot and pleaded with the officers to be careful not to cause any further injury to it.

“They’re hitting me for no reason. One puts his knee on my neck. They were all piling on top of me. I said, ‘Please, I just had surgery on my foot.’ One of the cops stepped on my foot. Another cop comes and steps on my head.”

Falcone has now been left with a broken nose, two black-eyes, cuts to his face and body, and more foot surgery.

Falcone not only plans to sue the NYPD for violating his civil rights, but also for the thousands of dollars in medical treatment he must undergo as a result of the brutal assault.