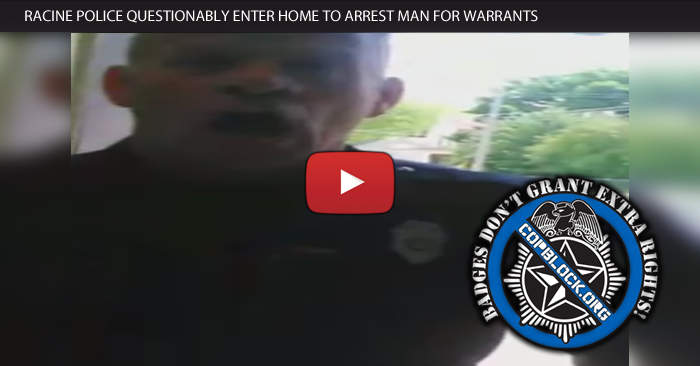 Benito Barrios had just arrived at home for lunch from work in Racine, Wisconsin when a police officer allegedly pounded through a door and entered the residence.

The officer in the video can be seen inside the residence, screaming aggressively at Barrios to “Come outside.”

Details are unclear on why the officer followed Barrios inside.

This is what Racine police do now? For traffic tickets, where is the warrant to come into a residence? Free my son!

In a conversation with Barrios’ mother, she claims he was not driving the vehicle, but her son did have misdemeanor warrants.

From the video, it could be argued if the officer had probable cause to enter the home he would have instantly made the arrest instead of screaming at Barrios to “come outside.”

Barrios’ mother claims this particular officer has been “stalking” her son for years, and her son referred to the officer by name during the incident.

In a separate video, backup has arrived and they take Barrios into custody with many units on the scene of a nonviolent situation.

This is what happened after gang unit Boek called for back up.. 9 suv’s! Took him out like a criminal over traffic tickets. He has harassed my son and family for years. He told judge my son used me as a shield!! NOT TRUE!!!!!
He had come home for lunch as you see he is a hard working man supporting his family.

Barrios’ mother claims since the incident, she has threatened to file complaints against the officer who entered the residence and officers have showed up at the house questioning her family about the complaint in question.

There has been a GoFundMe set up to help the family, as Barrios was their only source of income.