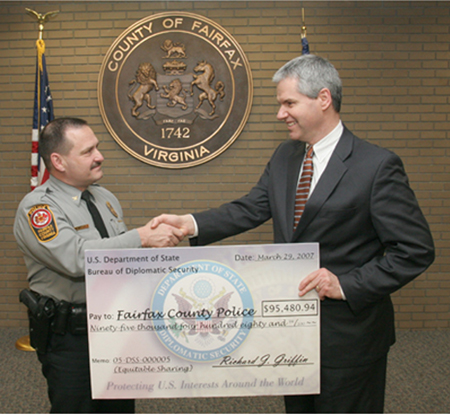 It’s been said that Fairfax County does not have cops, it has tax collectors, and in many ways that’s true; When the county’s ill-trained, trigger-happy, roid-raging warrior cops aren’t occupying themselves  by robbing unarmed people of their very lives, they are busy committing literal highway robbery. Let us count the ways.

For those that don’t know, civil asset forfeiture is the kind of legal racket that could only have been dreamed up by a very specific type of criminal mind – the kind that seeks elected office. It allows law enforcement agencies to seize cash and other property from people based on suspicion that it is the proceeds of criminal activity or will be used in criminal activity. It was framed as a means of taking resources from large criminal enterprises and funneling money back into crime prevention activities. Instead it’s been used as an excuse to turn anyone carrying cash into a suspected criminal, including people traveling with cash to buy a used car, or build a new church with members’ cash donations, and for purposes as ridiculous as hiring clowns, and buying margarita machines and even tanning salons.

The agencies involved are interested in cash, not convictions, so the person who has their property seized is usually not even charged with a crime.  If they want to get their property back, they have to be able to invest significant time and money to go to court to fight for it. Police departments often use the threat of prosecution to keep people from seeking to recover their assets. One particularly nasty department in Texas even threatened to take away people’s children if they didn’t agree to forfeit their property.

It’s a terrible practice that’s rife with abuse, so naturally the Fairfax County Police Department is an eager participant, collecting around $13-14 million in fines and forfeitures each year.

$17,550 of their haul for 2012 came from Mandrel Stuart, an unfortunate motorist from Staunton, Virginia who was traveling through Fairfax County on his way to DC.  Fairfax County cops pulled him over  for having windows that were tinted too dark, even though they didn’t have a device with them that could measure if the tint was actually too dark or not.

Stuart made the classic mistake of answering the many questions of the officers who pulled him over, allowing enough time to pass for a drug-sniffing dog to be called to the scene. The drug-sniffing dog turned up just 0.01 gram of marijuana, but police officers found Stuart’s cash inside a brown paper bag he had in the car. Stuart operated a small restaurant; He had been planning to buy equipment and supplies from an acquaintance.

After detaining Stuart and his girlfriend for 2 hours, the cops let them go, minus the cash. It took Stuart 14 months to win his money back in court, at a cost of nearly $12,000 in legal fees. Fairfax County had to cover those fees when a jury decided the case in Stuart’s favor. However, even though he won, he lost. Unable to pay rent and his employees after his cash was stolen, he had to close his restaurant and now works in construction.

As unfortunate as Stuart’s tale is, some might say he is lucky to have made out with his life. The family and friends of Sal Culosi speculate that he was targeted by an undercover detective for making casual wagers on college football solely because he made a good living as an optometrist and had more money than the rest of the group of friends he bet with. In 2006, Culosi was accidentally shot and killed by a member of the SWAT team they sent to serve an arrest warrant on him. A $2 million dollar settlement was eventually paid to his family.

I would say that was an expensive lesson to learn, but if there’s one thing that the Fairfax County Department excels at, it’s not learning lessons. They are still sending the SWAT team after nonviolent illegal gamblers, putting them at unnecessary risk of injury and death.  Tom Jackman of the Washington Post describes a raid from last year:

On a quiet weeknight among the stately manors of Great Falls, ten men sat around a table in the basement of a private home last November playing high stakes poker. Suddenly, masked and heavily armed SWAT team officers from the Fairfax County Police Department burst through the door, pointed their assault rifles at the players and ordered them to put their hands on the table. The players complied. Their cash was seized, including a reported $150,000 from the game’s host, and eight of the ten players were charged with the Class 3 misdemeanor of illegal gambling, punishable by a maximum fine of $500.

The players were baffled by the show of force sent after “a bunch of consenting adults playing cards in somebody’s basement,” in the words of one player. “They could’ve sent a retired detective with a clipboard and gotten the same result.” Fairfax County cut a deal to drop charges against the players, a deal that allowed law enforcement to keep 40% of the cash they seized, which is what they were after all along anyway.

Police departments have long been rumored to engage in ticketing schemes for the purpose of revenue generation. In Fairfax County, we know for a fact that they do. The Washington Post obtained a memo specifically outlining an expectation that officers would have at least 2 traffic stops per day, with at least one of them being a summons.

Chief Roessler dismissed the memo as a mistake and said there were no quotas in effect, but the department’s pattern of prioritizing collecting money above legitimate public safety issues is so well-documented, it’s somehow hard to believe him.

While Fairfax County cops scramble to wring as much money out of residents and visitors as possible, they neglect offenses with actual victims, like rape. The state-wide inventory mandated by the state legislature uncovered that Fairfax County had the highest number of untested rape kits in the entire state. At 347, they had nearly 100 more untested kits than Richmond, the agency with the 2nd highest number of kits, and their 2014 closure rate for forcible sex offenses was 57.89%. They do a bit better at solving homicides with a 70% closure rate, but there were also only 10 homicides in the county last year.

There are no financial incentives for police to target crimes like rape, theft, and fraud. There are no lucrative assets to seize, and no state or federal programs funding and arming police with military equipment to address those crimes the way there are for victimless crimes like narcotics and traffic enforcement, and so those crimes become less of a priority for police departments. That is exactly what we see in Fairfax County. Larceny/theft is by far the most common crime residents report, but the clearance rate is a mere 29.55%. The Department collects millions of license plate photographs each year, tracking the movements of unknown numbers of residents and passerby each day, yet the case closure rate for stolen cars is still only 31.83%. The drug/narcotics clearance rate is nearly stratospheric at 78.74%, though. Pro-tip: If your car gets stolen, just tell the cops you think the guy who took it had some pot on him or was placing bets on how many cars he could steal. They might actually be interested in pursuing the case that way.

This is the third article in the Why We Protest series.

Join us at our August 4th protest in Fairfax!

2.1k
SHARES
FacebookTwitterGoogleRedditTumblr
DiggLinkedinStumbleuponMailPrint
You Can Support Cop Block by shoppping on Amazon using the banner below:
BANNERS ARE CLICKABLE